Right or wrong, in my mind, BMW is synonymous with quality; despite recent recalls, which are frankly rampant in the automotive industry as a whole right now for whatever reason. At any rate, while I don’t particularly care for most of the BMW styling, I cannot deny that often times “you get what you pay for”, which in this case typically means reliability and a motorcycle loaded to the gills with options (at least, that’s the perception…). I’m not chomping at the bit for a new Beemer by any means, but I wouldn’t pass up a good deal on a used one if the opportunity struck.

This year it appeared to me that BMW has made minimal upgrades to the GS line (maybe I don’t know what I’m talking about), but made big strides in the “Adventure/Sport Touring” category with the new S 1000 XR. True to form, I’m a bigger fan of the Triumph Tiger Sport (1050… not available in the U.S. for some unknown reason…), or the Ducati MultiStrada, but the press seems to love the sporty new XR. I can’t really speak for most of the other sport or naked bikes, so I’ll just post the photos… 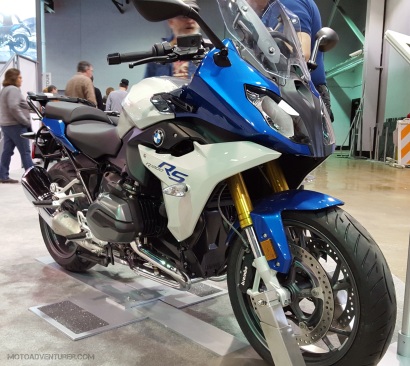 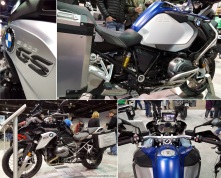 I snapped a quick photo of the RnineT at last year’s IMS in Cleveland, but this year I couldn’t help taking a closer look. The clear coated, brushed metal tank looks fabulous on this throwback café racer. There’s simply no way I could justify the expense of the new RnineT ($16k…), but I cannot help drooling over the look, performance, and shaft drive; undoubtedly I’ll be even more enamored with the recently released RnineT Scrambler when I see it in the flesh.

The (BMW) pinnacle of quality over aesthetics is probably the R 1200 RT in my mind. While I’m convinced I need a bike I can really get dirty, I realize that someday I want a hardcore (sport) touring machine, and the 1200 RT is unmistakably on that list. While I don’t find the styling emotional stirring in the slightest, the booth representative didn’t call the 1200RT BMW’s flagship bike for nothing. I imagine there are perks to the K 1600 GTL models, but I admit I find the opposed twin (and the price point…) of the RT more alluring.

Back to IMS Chicago