Cleveland IMS: Yamaha – A bike for every taste 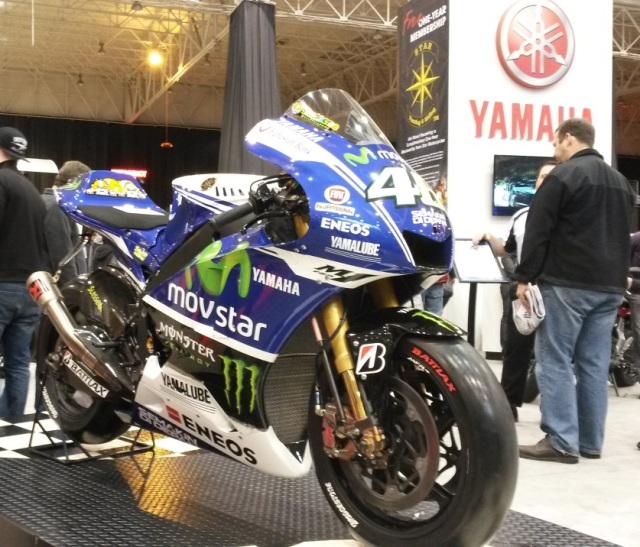 Yamaha is obviously known for many things: Valentino Rossi, goes without saying; the YZF-R1, which certainly has its own following akin to the GSX-R; the FJR, the FZ1, the new FZ-09… I can go on (let’s not forget dirt bikes either). This list is only getting longer and more interesting with the latest editions to the Yamaha; the new R1, R3, and long awaited FJ-09 (the “MT-09” has been available overseas for a while now). There was a lot to see in the Yamaha booth, and sadly, I still didn’t sit on all of them. 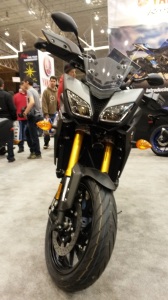 My number one target in the Yamaha booth was the FJ-09. I’ve been sore with Triumph since they stopped importing the Tiger 1050 into the states in 2013. Okay, so maybe it’s odd for a “cruiser guy” to be so enamored with standard bikes, but what can I say, I respect that a certain tool is designed for a certain job. At any rate, for some reason Triumph decided that a 1050 “sport touring” bike (emphasis on sporty performance) wasn’t for the U.S. market; fortunately Yamaha kept their eye on the prize and moved the MT-09 into the U.S. and called it the FJ-09 for sport touring. I rode the ’07 Tiger 1050 last summer, and was very impressed with its handling, cushy ergos, plush ride, and absolute sportiness. As previously stated, my tail-gunner was less than impressed with the seat; based on initial views via the web, the FJ-09 seems to have a less steeply slopped pillion seat, and reasonable reach from the seat to the asphalt. 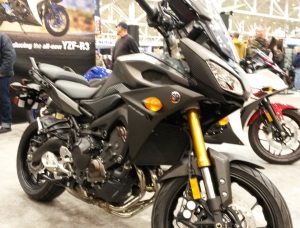 Yamaha took the 847 cc triple from the acclaimed FZ-09, increased the suspension, slapped on some angular covers and called it a “sport touring” bike aimed at riders that don’t want the 650 pound yacht that is the FJR, Trophy, Honda ST (more like 750 lbs…), and the BMW 1200 RT. The new FJ-09 has roughly 5″ of travel in the front and rear suspension and weighs about 462 pounds on the road. I’ve been unable to locate the performance specs, but I assume they’re on par with the FZ-09 (107 HP, 61 Ft-Lbs.); All in all, it looks fantastic on paper. From actually sitting on the new FJ it seems sporty and nimble like the 1050 (if one can determine that while parked), but the boss says it also suffers from the same problem, pillion seat is a no-go. While the FJ-09 is more acceptable than the Tiger 1050, less steep, the height difference is reasonable, but the same “cliff” between the two makes aggressive riding somewhat more uncomfortable (or so it seems). That aside, the new FJ-09 is hot! If you’re in the market for an on-road only, single rider, well rounded motorcycle, you’ll want to take a look at this ride.

While the FJ-09 was the bike I really wanted to lay my hands on, the Super Tenere is also on the short list of qualified “adventure-esque” motorcycles I wanted to look at. I personally feel that the Super Tenere is the most inexpensive of all “adventure bikes” based on its weight class, but it also has the least farkles and based on past reviews, is the least dirt worthy. Those points aside, a bike my wife likes and finds comfortable is more likely to find its way home (and sooner), so we climbed aboard the newest Super Tenere. Admittedly, I’ve done very little homework on the new Tenere  (prior to this post), but I was actually impressed once I straddled the seat. It was quite a reach to the ground on the BMW 800 & 1200 GS models, but I was shocked by Yamaha’s 1200, it was very comfortable and easy to put my feet on the ground (I’m 5’10”). The wife was really impressed with the pillion seat, 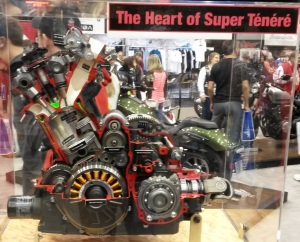 apparently it was quite ample after the GS models and still permitted her to scoot up close to me without hanging off  the “cliff”. I had pretty much dismissed the Tenere up until now; while I have aspirations for established off-road prowess, the budget Tenere has earned some points with comfort, price tag ($16,190 ES model), shaft drive, and the boss approves of her throne. As it turns out, Yamaha has finally added cruise control, electronically controlled suspension, advanced throttle mapping, and rumors of heated grips being included on the ES (can’t find that on their website for some reason); the only thing left now is to fix the pesky ABS issue (not needed off-road). 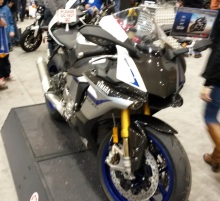 Every rider has their own taste, cruisers, baggers, tourers, super sports, and so on. While I haven’t seen a motorcycle I didn’t like, certainly I too have my favorites. I like to put in long days in the saddle, so utility has become the standard by which all bikes are measured for me; at same time, I can’t explain my eclectic taste for cafe racers and vintage bikes. That brings me to the new YZF-R1, the bike I knew nothing about until last month, and against 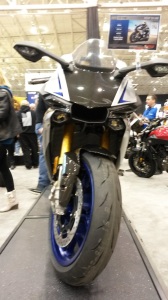 the competitors – I’m impressed. I spent some quality time with a copy of Cycle World magazine last month and read it cover to cover, including this bit on the R1. While I dream of the day I can have a sport bike in the stable, it’s probably a long way off, and therefore I’ve not dedicated much research to the topic. Ultimately the sport bike designers have begun pushing the limits of street legal engine performance, first Kawasaki with the new H2, Honda responding with basically re-badged MotoGP bike (neither of which can most of us afford), and Yamaha with a revamped R1 including all the best features of modern Grand Prix race bikes. I’ll spare you the details, sprinkle in a few photos; check out the article, I look forward to hearing more about it this summer.

Not far from the R1 display was the FJR; this whole quest for the “adventure bike” actually started from looking at sport touring bikes; I quickly discovered I can get more for less in an adventure bike (plastic and foam are expensive apparently…). I have realized however that the FJR is a budget touring bike, and readily available used, so I wanted the wife’s opinion. Climbing aboard it was everything I expected; I have sat on the FJR and Triumph Trophy several times at other dealers, but never with the wife aboard. My fear has been thus far that the leaned forward position of the “driver” would get tiring on long freeway stretches, but certainly that can be fixed with risers. Ultimately I was met with what I can best describe as “meh” from the boss. The pillion was apparently comfortable, but she’s just not ready for the typically sport touring styling. For those of your interested, the new FJR is $16,980 for the ES model, 1298 cc, has about 5″ of suspension travel, and weighs 644 pounds (again, unable to find performance specs – sigh). 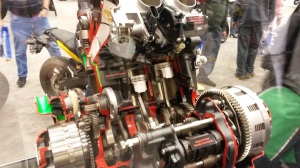 We took a few moments to take a very quick look at the FZ-09 and FZ-07; the wife sat on both. I’m a big fan of both, and would love to take each for a test ride… someday. The wife is still not convinced that she likes the leaned forward position of sport bikes just yet; we’ll see. If I am not already in habit of repeating myself, if you’re in the market for a roadster/hooligan bike, check out both of these rides (especially that triple… oh the sound!). I’ll also give honorable mention to Yamaha’s SR400 here, while we didn’t sit on it, it’s Yamaha’s budget street legal classic (similar to the TU250). Somewhat classic cafe look, 400 cc, $5,990 new, 384 pounds, kick start only. 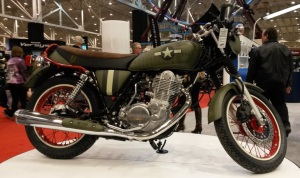 That last bit is probably the deal breaker for some new riders; while I think it’s cool, I kind of hope Yamaha decides to add a starter (especially for the price of a 400). Speaking of starter bikes I also want to comment that Yamaha has also thrown their hat into the “300 cc” ring  with the new R3, going right along with my sentiment that they have a bike for every rider. I’ll add that to the list of bikes I meant to sit on but didn’t take the time. 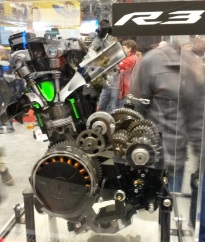 Unfortunately I’ve probably let down any cruiser fans that are reading this, I took all of about two seconds and sat on the new Stratoliner, but that was about all the time spent looking at Star motorcycles. No disrespect intended, the whole place was very busy, just didn’t have time to dedicate to cruisers. I will add that I’m glad other manufacturers are putting fairings on their cruisers; I don’t care for them, but it breeds competition, and that I do like. The new Stratoliner looks pretty good, I’ve ridden other Star cruisers in the past and believe it’s a quality product; you’re likely to catch more about them if you hang around the site long enough.

All in all, Yamaha had a packed booth with a lot to see. I felt like I spent a reasonable amount of time in each booth, but now sitting here typing this, it’s apparent I missed a ton photo opportunities and details on new models – lesson learned. Hopefully next year I can curb my excitement and focus on content.