January came to an end, despite a short respite which I actually brought the bike back home (…to the porch), she’s sat covered for the last few weeks. Finally, after the outbreak of spring fever, temperatures rose above freezing Saturday and the snow melted. It’s a battlefield out there, don’t get me wrong, but I braved it, just for a couple miles.

So what’s a Moto Adventurer? I have found that I share a taste for photography with other riders that I know; Triumph riders in fact, which is kind of weird (coincidental?). There a million reasons to ride a motorcycle: addiction to speed, addiction to danger, connection with nature, the sights, and the road food to name a few; all of which I am guilty of. I am looking forward to covering the road food  in detail as the “riding season” approaches; but in the interim, the winter offers a unique view of local sights, and thus opportunities to take some of the best photos.

At a balmy 36 degrees, I donned my reliable Firstgear kit, neck-gaiter, winter gloves, and headed out on to the road. Snow was still covering the driveway, which helped keep my mind fresh about what I as undertaking: it’s February, just above freezing, all following a couple weeks of consistent snow on the ground. The roads were significantly salty, decimated by snow plows, pot holes galore -I’m prepped for battle. I try to avoid getting the bike out on salty roads whenever possible. Considering it’s February in Ohio, I tend to be somewhat liberal with that standard as this may be my one shot to ride between now and March for all I know. It was supposed to reach 40-something that day, but the advantage to getting out early is that the snow melt won’t soak the roads and get salt spray all over the bike; which would be bad. A little salt dust is easy to wipe off when I get home, but getting the Triumph drenched from riding through puddles is what I’m trying to avoid. I assume some readers are cringing right about now. 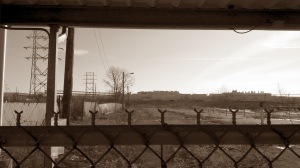 Beyond looking for an excuse to get out on two wheels, I had plans to keep this ride close to home. I knew what the road conditions would be like right around the house, so that would keep the cleanup simple, and hopefully the rubber side down. Since my range was limited, I figured I’d venture out in search of some local “slums” and take some pictures. Dayton is by no means Detroit; but we too took a serious hit in the downturn in 2008. Once the machine tool capital of the world, a significant number of manufacturing companies folded when the economy tanked; over five years later, there are many lots still sitting empty. I have no idea where it comes from, but I’m fascinated by the way nature “reclaims” what humanity once built. There is some form of art in “urban decay”; it’s something that cannot be accurately recreated on a computer or at a Hollywood set. As a kid I was fascinated by the Mad Max series and the post-apocalyptic world, but after years of being a technician for the local cable company, working day after day in Dayton’s worst neighborhoods, “Mad Maxian” images are a lot closer than you think. 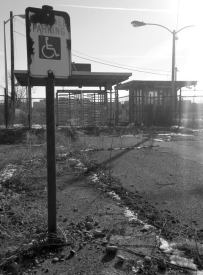 I stopped at the former GM plant to snap a few photos; for those of you unfamiliar, there was an HBO documentary, “The Last Truck”, that actually covered the closure of the Dayton assembly plant. There is a lot more to the story than was covered on TV, to include all of the Delphi Chassis closures prior to the downturn, all of which has left a significant portion of industrial real-estate vacant for years now. Skirting around areas of “legal access” I remind myself of all the left behind tools, sheet metal, and rusty nails lying in wait just to puncture my unsuspecting tires, let alone all the salt; this trend followed me for the next couple hours. 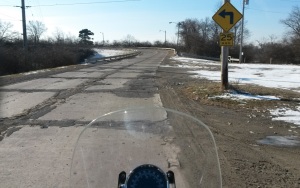 Tooling around town through the industrial districts of south Dayton, I found myself trapped by damp roadways on my otherwise simple return path to the house. Again, I redefine, what is a “Moto Adventurer”? As I’ve said before, my co-workers look at me like I’m nuts, so I take it for granted that folks that ride at “near freezing” temperatures are in the vast minority of American motorcyclists. That being said, this urban adventure turned out to be the discovery of new ways to get home in attempt to avoid wet salt stricken roads.

All in all, it was an awesome morning to be out on the bike. It was just over 40 when I got back to the house, and somehow I was actually sweating (Firstgear Escape pants are amazing). I reached the point where the maze of side roads had so much salt in the intersections that I had successfully painted myself into a corner. So much so I finally admitted defeat and headed for the freeway. The funny thing is… the interstate never felt so good. Last year Old Man Winter was not as forgiving, after a Saturday like this one, I hope Punxsutawney Phil is dead wrong, just like the weatherman, and early spring is on its way.