A few weeks back I caught an article about Harley Davidson (HD) offering the Basic Rider Course (BRC) free to Active Duty Military and Military Veterans through their Rider Academy.

While I currently have my endorsement, and consider myself an experienced rider, I still felt that it would be beneficial to take an official training course since I did things “the old fashioned way”. In Ohio, to get your motorcycle endorsement you’re required to pass a written exam and then subsequently given your “learner’s permit”.  Once a rider feels comfortable, they take the Ohio Motorcycle Road Skills Test, which is what I did. When I was a kid, I “helped” my dad set up a training course for the motorcycle rider test in a parking lot near our house; when I decided I also wanted to ride, I figured the old fashioned way was the easiest path to my endorsement. Since then I have spent more time focused on improving my skills and riding safer; considering Harley Davidson wanted to send me to BRC for free, it seemed like an offer I couldn’t turn down.

What does this have to do with the Street 500? Obviously Buell has come and gone in the past few years, so now that Harley Davidson has released their new Street 500 and 750 series motorcycles, the HD Rider Academy (formerly Rider’s Edge) has picked up the new Street 500 as their standard training bike. Selfishly, this was another selling point for me, beyond the safety and skills aspect. I’ve never met a motorcycle I didn’t like (well… almost never), so riding this new 500 cc motorcycle added to the fun factor for me. Given, this is an extremely limited review given the controlled environment of a BRC course, there were still a couple unique opportunities to get to know the motorcycle, especially for a non-traditional “journalist” like myself.

At first glance, the Street 500 does not overtly appear to be a Harley Davidson in my mind.

I suspect that if I removed the badges (and changed the tires), the average Joe would not recognize the new Street series motorcycle as a Harley. Considering the radiator on the nose of the frame, 60 degree “V” angle, exposed cables and whatnot, it doesn’t immediately scream “HD”. That’s probably love-hate among prospective buyers, and I suspect causes some heartburn among the most devoted HD enthusiasts. In my case it’s a selling point, and something I am actually happy to see; to me, the release of the Street 500 and 750 represent an expansion in the Harley brand. While not a rapid departure from the establishment, mid-controls and upright seating put the Street series bikes more in the entry level “standard” category, whereas the rest of the HD bullpen is traditionally composed of big bore cruisers.
Aside from the less aesthetically pleasing orange crash bars (for BRC purposes only), the Street 500 has definite cues from traditional Harley Davidson fit and finish. Despite how common the phrase “Fit & Finish” is used, I still struggle to accurately define the adjective, but that aside, I am still impressed with the part quality and attention to detail Harley invested into the Street 500.

The (mostly) metal accents, quality engine castings, and minimal use of plastic helps to add value to an otherwise entry level bike. I’m a big fan of the new tank design, despite its heritage, I’ve never been a fan of the Sportster peanut tank (sorry…), the Street 500 tank seems to take its cues from the 833 Super low, or the Sportster 1200, which help accentuate the curves of the bike, which is what I would expect on a cruiser. I opted for the “tall” seat for the BRC course; mind you, I’m only 5’10, but after riding a cruiser for 3 years, I realize that I prefer to sit up a bit higher, move around on the seat more, and keep my legs somewhat straighter. I didn’t sit on the normal seat for more than a few minutes, but I will say that the tall seat was quite comfortable for the limited time I spent on it over the weekend. I was impressed by how much material was actually in the seat, far more than I have on my stock Speedmaster seat (not sure if that’s normal, or part of the “tall” seat). Without taking the bike over about 20 MPH, the suspension seemed pretty plush, but that’s probably not a fair assessment given the conditions; I suppose it’s possible that it’s a bit “spongy” considering it’s an entry level bike, but other cues suggest that may be a false premise. Belt drive is also another selling point for the Street 500, I’m betting few bikes in that price range come with belt drive standard (Vulcan S 650 is chain). I was surprised to find the wheels fitted with Michelin Scorcher 11 tires; considering Harley’s typical preference toward Dunlop, a plus in my book.  I’m also a big fan of the fork gaiters and headlight cowling; from the moment I laid eyes on the Street 500, I thought that it was begging to be stripped into a new age cafe racer.

On the other side of the coin, there are a few items that are somewhat at odds with the Harley Davidson brand (and I’m not talking about liquid cooling…). There’s no mistaking that there are plastic highlights on this motorcycle; please don’t confuse me with “American Motorcycle faithful”, plastic isn’t always a bad thing, but if done wrong it screams “budget bike”.

I think Harley did a pretty decent job considering their competitors, but the right side cover seems a bit lacking. While it’s of no consequence to me, I imagine that Harley faithful will also hate the turn signal switch; the traditional, non-canceling, left hand-grip only variety that’s extremely common on virtually all other brands. On the other hand, I did not care of the engine cut-off switch on the right grip, in this case all black, with a left to right movement; I assume I’m being petty, but I would think a “kill switch” would be red, and actuate up and down (probably just what I’m used to). Another marginal complaint would be the mirrors; they’re standard HD mirrors by all definition, but placement just sucked in my opinion, I got a great view of my shoulders, but truly struggled to see behind me.

My major complaint is really about the cable routing on the exhaust side of the bike; while others may complain about wiring on the outside of the bars, that’s to be expected on a smaller bike like this in my opinion, however it seems to me that the main wiring bundle, among other things were a severe afterthought. In Harley’s defense, these Street 500’s we rode in BRC are the first generation, sent to the Riding Academy before the dealers even received the sales models, so that may be somewhat of an explanation.

Where the Street 500 really shines is the power plant, I was really impressed with this 500 cc mill. I obviously had a 150 cc scooter, and I currently “own” a CB650, but I definitely feel like the Street 500 is pretty peppy for a “small” bike. I was also very impressed with the exhaust note; considering the new Street series is liquid cooled, overhead cam, I could still hear the rumor of the traditional Harley Davidson staple, combined with a soothing whistle of air intake. Unlike some of the Victory motorcycles I’ve ridden in recent days, the overhead cam noise on the Street 500 was extremely subdued.

I will also give props to Harley for instrument cluster; up front, similar to my Speedmaster, the speedo also included turn signal indicators which I felt was a nice touch. There’s no Tachometer on the Street 500 (and I assume not on the 750 either), but that’s somewhat expected on an “entry level” bike. I don’t have the stats off hand, but the overall chassis length feels pretty short, which is made more obvious by its nimble cornering ability, another plus for the urban commuter.
All in all, the Street 500 impressed me. I personally don’t like labeling bikes as “entry level” considering that 650 cc 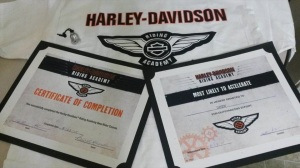 bikes were once “big bikes”, moreover superbikes are typically in the 600 range. That being said, I was certainly guilty of thinking the new Street 500 was a dinky beginner bike, however I have been swayed by its performance. The Street 500 was extremely nimble, surprisingly torquey, and quite refined considering the budget. Given the only difference between the 500 and the 750 is the bore, I would definitely consider a Street 750 as a modern, yet retro, café racer project.