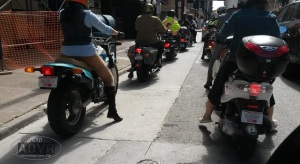 If I hadn’t previously mentioned, I hate commuting. I commute directly through downtown virtually everyday for work; it’s painful. First world problems I suppose, but frankly I just can’t get over the way people behave behind the wheel. I’m sure other riders may understand this, but it’s frightening what riding a motorcycle has done to; one, improve my driving; and two, draw my attention to other’s lack of attention, if not flat out ignorance. Considering that riding a motorcycle demands constant vigilance on the roadway, I now suddenly notice every driver on a cell phone, women putting on makeup, and random people eating their breakfast while driving to work.

Beyond most drivers’ inattention, what really shocks me is rush hour gridlock which seems to occur for no reason what so ever. Once you’ve passed through the same arteries of the city day after day you become familiar with business as usual; on a random Tuesday why are we all riding bumper to bumper through the same 2 mile stretch of downtown that was moving freely yesterday?  Better yet, why does merging seem to be such a process for some people? Undoubtedly, commuting is mundane, but are modern, urban drivers that distracted? Are the average “cagers” simply following the car in front of them with no regard to fellow travelers?

Frankly, I blame the automatic transmission. People used to say “standard” or “automatic”? If I told someone under 30 I drive a standard they’d have no idea what I was talking about. What does any of this have to do with traffic? Maintaining proper distance, letting off the gas, and most importantly, downshifting. I realize that I just unloaded three novel concepts on the great “unwashed” just now, but there are alternatives to using the brake pedal. Why, WHY, on earth to people go from gas to brake to gas to brake? Because it takes no effort to hold the clutch to the floor an more!

Let’s pretend for a moment we were all driving a “standard” through rush hour traffic again (or better yet, Riding!). Would people still be tailgating, riding their brakes, and incessantly diving from pedal to pedal? Perhaps folks would  just let off the gas when they notice traffic slowing ahead and let the engine brake the car? Maybe if drivers would watch not only the car in front of them, but the next car in front and those adjacent, they could slow down sooner, maintain a gap, and we could all smoothly cruise through the evening commute?

Maybe I’m way off base, or maybe I’m on to something; what say you?