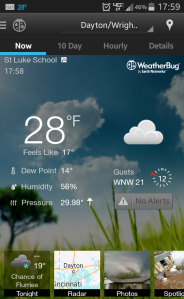 After double and triple checking the forecast early this morning, I scrambled around the house to gather my cold weather riding gear. Mr. Meteorologist said it would warm up to 37 today, with 20% chance of precipitation after Noon. No problem, I can handle a few rain drops I thought. Thus, at a ripe 29 degrees I decided to brave the frost in the hopes of at least riding to work one day this week.

Arriving at work I was invigorated from the chilly yet otherwise exceptional commute to the office. Suddenly around 10 AM I looked out the window and noticed the gloomy clouds off into the distance. Not long after 11, a pretty significant amount of flurries were swirling outside the window. Not the first time the weatherman has been a bit “off” so I checked the forecast again to make sure I didn’t need to flee back to the house for four wheels. Shockingly, the forecast had been revised since my 7 AM visit, now showing 0% chance of precipitation for the rest of the day. Scoffing at the hourly forecast, I looked at the radar, noting the blue splotches all over the city. Weather.com tends to be the “most” accurate of all the local weather venues, so I checked the “future-cast”, no snow or rain storms anywhere over Dayton between noon and 5. The irony here is that the snow CURRENTLY falling in Indiana was completely missing from the future-cast model (that’s a bad sign). Worse still, I noticed the temperature was still a good 5 degrees below the forecasted temperature for 11 AM.

At this point, the fear of being stranded at the office with a snow covered bike began to set in. Ultimately I could ride over to a nearby friends, or push the bike into the shop and pick it up Saturday; just a matter of getting a ride home. Truth be told, I assumed that it would be nothing but flurries between noon and five, but my biggest fear was that since the weatherman was FLAT OUT WRONG at this point, freezing rain could easily occur during rush hour, and that was the LAST thing I wanted to be stuck in.

Snatching up me gear, I headed out to the parking lot to book it home. Key in the ignition, typical sound of fuel pump/EFI whine, I thumbed the ignition; “click”. The biggest Sigh… and again “click”. “Nice” I thought to myself, kicking up the side stand and pushing the bike backwards up to the “higher” side of the parking lot. Without a long tirade about how awesome manual transmissions are and how I hate automatics; the ability to push start is always a perk to a manual. Push starting your motorcycle is not easy by yourself, but I’ve successfully done it before (on no less than 3 occasions). With the bike at the high end of the lot, I popped the “fuel enricher” (choke for EFI) and started pushing the bike down the include. Push, Step, step, step, coast, 2nd gear, clutch, crank, crank, skid… sigh. After two attempts I finally called the cavalry and had a buddy give me a solid shove and I was finally off. Racing back to the house I admitted defeat against old man winter yet again.

As I sit here writing this now, it’s a crisp 28 degrees outside; almost 10 degrees colder than the “estimated” high today. Yet another reinforcement of an old motorcycle guideline: “Despite the forecast, it’s going to rain”.

P.S. you’ll probably see a post about a new battery in the near future…