Well, I finally reached the weekend

following my Friday incident. After stuffing a new battery into the Speedmaster I was keen for a ride. In my haste I didn’t bother documenting the process of handling battery connections for the bike itself, the heated grips, and the battery tender pigtail, but I figured the average Joe can probably handle their own bike battery replacement. For any reason that’s not the case, comment below and I’ll be more than happy to compose something about how an otherwise simple task is typically made more difficult by modern technology.

At any rate, with fresh juice under the seat, I sped off, lusting for twisty roads and new adventures. Two years ago, I rode down to southern Indiana with my RAT Pack pals; I’ve been planning a return trip at some point this year, so I figured I’d recon roads in that direction.

Germantown is a really great spot to start from when heading southwest out of Dayton; there’s a gas station and a few places to grab breakfast just outside the Dayton suburbs, so I hustled that way to hit some of my favorite local curves. It was certainly crisp outside at 33 degrees, but with the new battery installed I swear the heated grips were running better than the last few weeks. Despite my complaints about poor weather and worse forecasting, we did get a good hard rain at least once last week to wash some of the sand off the roads. Keeping in mind the temperature, I kept some composure about myself to avoid extending beyond the limits of the tire’s ability to stick to the road under such conditions. That said, for probably the first time this year I was finally able to really wind it out on some country roads. 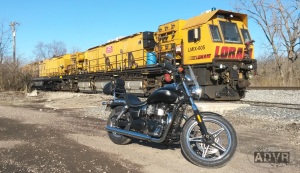 After burning through the bends on Oxford Road, I continued through West Elkton, and finally on to Camden, Ohio. At least temporarily content from leaning the bike over a little, I wondered through the small town of Camden in search of some local fare. After tooling around the side streets, including a couple random photos, I settled on “The Depot Dairy Bar and Restaurant”, right on the east entrance of town.

The Depot from the outside appears to be an old train depot (who knew?). 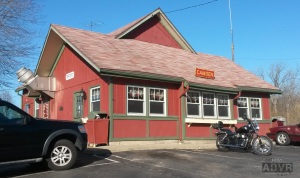 Admittedly, I was unable to find the backstory on the internet, nor was I able to get much history from the young girls working behind the counter. Upon entering the building I was pleased to see this was an “order at the counter” establishment so I would still have some daylight left to hit more backroads on the way home. As usual, I told the young lady I’d never been to the place before and asked her what was good. Wittingly, she told me “everything” and asked what I liked. With a smile I replied “everything!” at which point she told me it was going to be tough to choose. I asked her what her favorite was; she told me that it used to be the “Depot burger”, most people get it, but she’d been there for some time so she’d had about a million of them. 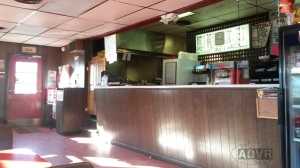 I’m at “The Depot” I figured “The Depot Burger” seemed like an obvious place to start. Like any other reputable “American Fare” establishment, The Depot also has a healthy selection of fried foods; broccoli, cauliflower, and my favorite, fried mushrooms, which I wasn’t going to pass up. Foolishly, for some reason ordered a soda; completely ignoring the name on the sign “…Dairy Bar & Restaurant”. Huge blogger fail on my part; had my beautiful bride been with me, certainly I would be updating you about some fantastic malts. Sitting down at the table, I patiently awaited my name to be called, and the new mystery food to arrive.

If you haven’t noticed already, I’ll pretty much eat anything (stay tuned for a “Salmon Pizza” review, it’s gonna’ happen), but just like craft brew versus PBR, I still love an all American cheeseburger. I typically grill quite a bit during the summer, and there’s still nothing better than a well salted, medium well, grilled burger; preferably with cheese, pickle, and mustard. 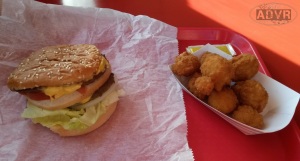 The Depot burger didn’t disappoint, two beef patties on a triple-decker bun, cheese, mustard, pickle, onion, lettuce, and tomato (made to order); the dinner I had been waiting for. As much as I would like to put eloquent words to a story about a cheese burger… it was a good cheeseburger. I would put the Depot Burger on par with the Big Mac; two patties, three pieces of bread, but not so much that you’re overpowered by either. The Fried mushrooms were also good; obviously you can get a fried food a million ways depending on the breading chosen etc. In this case I was happy that the breading wasn’t soggy or grainy, but mostly that I didn’t need a visit to the emergency room for burning my tongue after the first bite; which is typically the norm from other establishments. I admit I failed to order any dipping sauce for the mushrooms, but truthfully none was needed.

If you’re wandering through Preble County looking for somewhere to sit down, get a cheeseburger and fries, The Depot delivered. Considering I have a significant amount of riding planned in this area, I expect I will be back to sample the hot dog side of the menu, along with more deep fried choices. At a minimum, I need to return in order to get a sample menu; as luck would have it, they didn’t have any on hand for me to take home.

3 Responses to Pubs and Street Eats 6: Diners and backroads