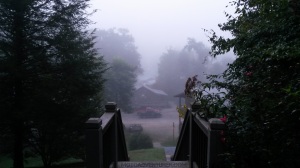 Despite the soupy morning air, the outlook for Friday was a lot better than the previous two days. My buddy Jon, who joined me for the trek down to the Iron Horse, put together a route down through Brevard to Oskar Blues Brewery; as a card carrying beer snob, I was obliged to tag along. As luck would have it, like virtually every other destination down this way, there was also an excess of twisties between the Iron Horse and our destination. 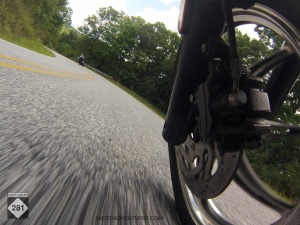 From the lodge we zipped across US-74 to Sylva to pick up North Carolina Route 107 (NC-107). If I hadn’t mentioned before, aside from high traffic hours (mostly on weekends) US-74 is actually a nice high-paced section of four-lane through the mountains; clipping along at 65 MPH, I’ve never leaned over that far on a four-lane highway before. That aside, I didn’t come to North Carolina to ride the four-lane, fortunately we picked up NC-107 in Brevard, and then onto a gnarly section of NC-281 toward Lake Toxaway. 281 was no joke, reminiscent of Wayah road, the tight downhill sections felt a lot faster considering the slightly better condition of the asphalt; chasing a handful of Triumph Triples and being pursued by a Multistrada, keeping up on a cruiser was somewhat of a chore. 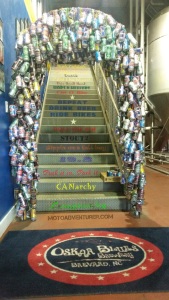 After muscling Lola down 281, we took a short jaunt across US-64 into Brevard to find Oskar Blues Brewery. If you weren’t aware, microbreweries are becoming quite the rage nowadays, at least in Dayton. I really enjoy a good dark beer, unfortunately they are somewhat difficult to find among the macro-breweries, and as much as I love it, you can only have so much Guinness. Asking the bar tender what dark beers she had on tap, I was surprised to hear that they had a TenFidy stout 2015 and 2012 on tap. I’ve heard of vintage wines, but I’ve never had dated beers before (different recipe perhaps?). She offered me a taste of each, to my surprise there was an unmistakable difference between the two; per her comments, I agreed that the 2012 was actually the better of the two. 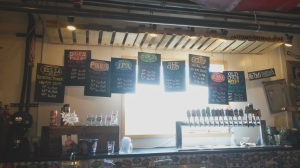 Oskar Blues, like other micro-breweries, doesn’t have a food license, however several of the local food outlets deliver to hungry beer drinkers. Over 400 miles from home, my buddies chose to have Jet’s Pizza delivered. While a chain, I still give Jet’s some serious props, it reminds me of what Pizza Hut used to be back in the day. I split the Hawaiian pizza with my buddy Andy; despite my self-proclaimed pizza connoisseur status, I’d actually never had Hawaiian pizza before that day. 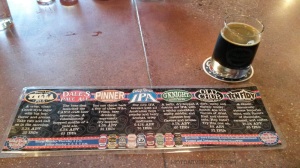 Pizza with pineapple (and ham!) was actually pretty good, especially with Jet’s “turbo crust”. Anyway, enough with the pizza, back to the beer; don’t get me wrong, I don’t condone drinking and riding, but I did safely taste (yes, taste) a couple beers to see what I liked. Oskar Blues offers a pretty respectable spread, while it’s a bit IPA heavy for my taste, they actually had one that I liked. Surprisingly, the G’Knight Double Red IPA was pretty legit; tasting it against the Old Chub Scotch Ale, I found the Scotch Ale more in my palette range, but it was a surprisingly tough decision against the red IPA.

After a hearty lunch and tall glass of water, I was back on the road with my RAT buddies. From Oskar Blues we cut across US-64 over to US-276 past Looking Glass Falls where we rode Tuesday. Headed up 276 the other way was a nice change of pace;
considering the somewhat limited time and vast number of roads to choose from down this way, 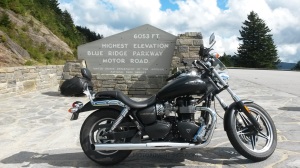 it’s actually nice to ride a good set curves in both directions. From the twisties of 276, Jon led us back over to the Blue Ridge Parkway (BRP) from Wagon Road Gap to US-74 at Balsam Gap. Admittedly, I think I enjoyed the BRP a bit more on the sporty Tiger, with its taller seat for better views, but it was somewhat reassuring to ride on my own, much more familiar, bike. Either way, writing this now, I still feel like the BRP was the best road I rode all week.

Approaching the turn from NC-28 to the Iron Horse I stayed on the throttle as my buddies turned off to hang it up for the evening.

With the sun shining, it was time to get another run across the Dragon with dry pavement. 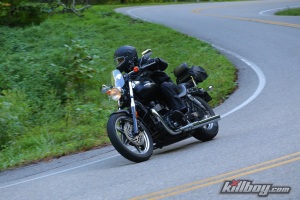 Unbeknownst to me, Friday around 6 PM is still a pretty busy time on US-129 as new arrivals are taking their first trips across the legendary road. As that became obvious, I stuck close to the white paint on the blind curves and otherwise kept my wits about myself to get in another run and avoid the unsuspecting riders crossing the double yellow headed the other way. (Photo from Killboy) 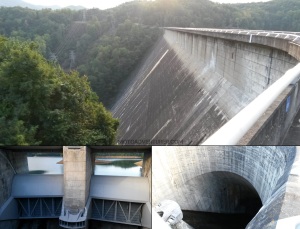 After a “down and back” across 129, I decided to stop and take some photos at the Fontana Dam on my way back to the lodge. Riding down this way last year I was aware of the local hydro-electric dam, but I had no idea that there were actually three in such close proximity. Next year I will probably try to stop and get photos at all three (Rumor is that “The Fugitive” was filmed at one of them). On another side note, I also didn’t realize that I parked my bike for a photo op right where the Appalachian Trail crosses the Dam. While not a motorcycle related item, the AT is another item on my Bucket List for this lifetime. 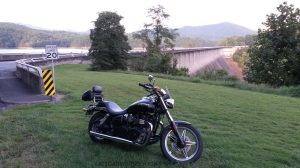 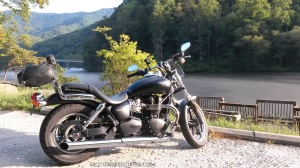 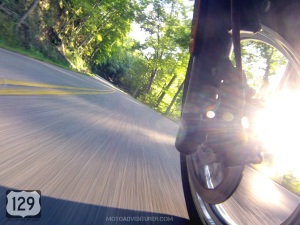 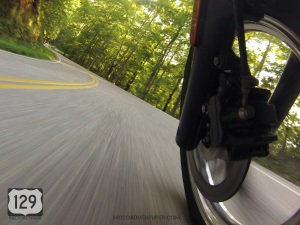 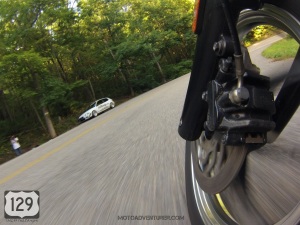 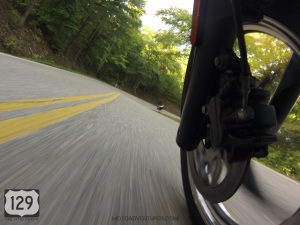 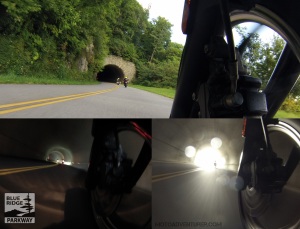 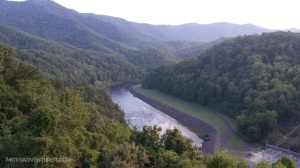 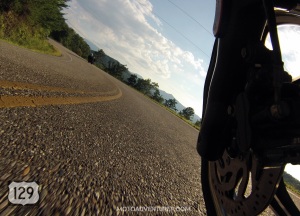 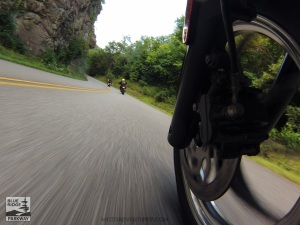 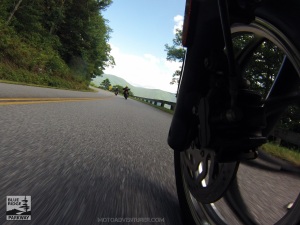 4 Responses to Triumph Dragon Raid 2015: Day 5 – More Twisties, Oskar Blues Brewery, and back to the BRP