Tuesday morning started out very similar to Monday, a few guys talking about a good destination, suddenly a group mysteriously formed; and again, me just along for the ride. Getting my stuff set up for the day, fussing with the GoPro batteries and whatnot, my buddy Brian waved me over. Knowing full well I have my eyes set on a new adventure bike (so much so I can taste it at this point), he said “hey I got something for you”, he then mentioned he was going on a dual sport ride through the dirt on his Honda, and handed me a key to his Tiger 800. Stunned I said “Are you sure?!”, he reassured me it he was comfortable with it and wanted me to know for sure if I really wanted my own Tiger. Apprehensive, but excited, I started moving my daily gear over to his Tiger. Sitting here writing this, I don’t think I can recall if I even knew where we were riding that day; Tiger keys in hand, I’m sure I didn’t care. I believe there were rumors of the Blue Ridge parkway toward the tail end of the day; if that was true I fortunately learned a few lessons about battery management for the GoPro the day prior.

Departing from the Iron Horse I began settling into my new seating arrangements; right away I was excited by the ability to stand up while riding. From the Iron Horse we rode along US-19 through Bryson City, Cherokee, and finally Maggie Valley. US-19 is a really beautiful road, almost strictly two-lane, but unfortunately lined with tourist stops that make the traffic aggravating on a motorcycle.

That aside, I appreciated the mountain scenery and daydreamed about the days that the old themed motels were still open. Once through the hustle and bustle of Maggie Valley, we turned south onto US-276 where the fun really started. Two-lane, similar to US-19 toward the bottom of the valley, the twisties on 276 steadily increased in frequency and difficulty as we neared the ridge line. The closer we got to the Blue Ridge Parkway (BRP) interchange, the curves and switchbacks really got interesting.

Passing the BRP, still on 276 as it wound back down the mountain, the switchbacks and hairpins got more challenging on the far side, especially riding downhill.
Following my buddy Chris on his Tiger 800 XRx I was thankful I was on Brian’s Tiger, the upright seating, mid controls, and increased ground clearance were confidence inspiring on this technical section of North Carolina roadway. Coming around the bend on 276 we stopped at a pull-off next to Looking Glass Falls for a break. The falls are a convenient motorcycle destination considering the roadside parking and stairs that take you all the way down to the water’s edge. I snapped a few photos of the falls and the bikes before loading back up on the bike for the next leg.

Just a few more miles down 276 we stopped for lunch at the Hawg Wild Barbecue at the corner of US-276 and US-64. I love “Soul Food” so I was eagerly looking forward to the meal at hand. I’ve been milling over the best way to describe the restaurant, but after some time, the best thing I can come up with is like a southern, rustic… pizza hut (or “Frickers” for local Daytonians). There were maps on the tables, covered with glass, with simple table arrangements with BBQ sauces and condiments. The service was very friendly (especially for such a large group); there was definitely a southern family feel to the place; just as I’d hope for in these parts. Looking over the Hawg Wild menu, I spotted the “go-to”. The menu included a loaded hot dog, and fried pickles; yes, this was a barbecue restaurant, but rules are rules.

The fried pickles were spears, the way I prefer, and the dog was loaded with chili, cheese, and onions. As a side note for folks unfamiliar, Cincinnati is known for its own take on the cheese coney; if you’ve not had a Cincy hot dog, I recommend you try it at least once. That being said, I’m not fan a Skyline Chili (that’s right, I said it!), I prefer Gold Star Chili if I’m forced to choose a chain, but in general I prefer chili with some consistency, but cheese and onions was a good start. At any rate, it wasn’t BBQ, but the lighter fare was exactly what I was looking for.

Getting geared up for more riding, rain looked imminent on the radar. Outfitted with a Tiger, but no rain gear to be had… I was up to the challenge. From Hawg Wild we headed down US-64 through Brevard toward NC-215.  Winding back up the mountain toward another intersection with the Blue Ridge parkway, 215 became very reminiscent of US-276, yet less traveled. As NC-215 approached Beech Gap we turned off onto the Blue Ridge Parkway headed toward Maggie Valley. It’s tough to say “headed north” or “south” when talking about individual sections of the Blue Ridge, considering it winds back and forth through the mountains in all directions.

I was spellbound on the parkway; the light traffic, higher speeds, immaculate asphalt, combined with some of the most scenic vistas I’ve ever seen, all happening at once. All of the photographs I’d seen up to that point had hinted of what a great ride it would be, but nothing compares to actually seeing it. While I enjoyed the Cherohala Skyway the day prior, the Blue Ridge was much closer to what I had envisioned, steep cliff faces, tunnels, and overlooks displaying the vast smoky landscape. Rain still held at bay, I rode along, soaking up every view and every curve… another box checked on moto bucket list.

Taking one of the last exits on the south end of the parkway, we returned to US-19 headed back through Bryson City toward the Lodge. Considering that the “Chuck Wagon Grill” at the Iron Horse was closed for Labor Day (observed), we decided to stop in Bryson City for chow at Anthony’s “Derailed”. Knowing absolutely nothing about the area, it’s seems that Bryson City has some significant railroad history, if the restaurant’s name wasn’t already a hint. Anthony’s was another dark, wood themed, rustic restaurant with a large patio.

Everyone in the group commented that the calzones, paninis, and stromboli were all excellent. On good advice, I went with the calzone; how can you resist pizza inside the bread? I wasn’t disappointed, so much so I foolishly finished the entire thing, despite my intent to take leftovers back to the lodge.

Gorged, I climbed aboard my buddy Brian’s Tiger just after the sun set and as few rain drops finally started to fall. Another day in the books, another bucket list item completed.

(The embeded Map doesn’t fallow the route exactly as described)

Back to the Triumph Dragon Raid 2015 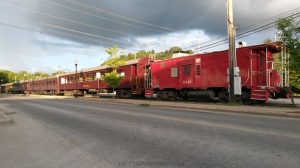 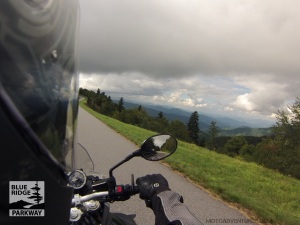 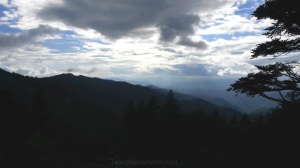