On more than one occasion I’ve mentioned I’m clearly in the tank for Triumph Motorcycles. Obviously, the launch of the completely new Triumph Bonneville line is a “must-see” for a Triumph die-hard like myself. Considering that family obligations may keep me from getting up to the Progressive International Motorcycle Show this year, I caught wind that Iron Pony Motorsports in Columbus was hosting a Bonneville Reborn showing last week, so I sped over there after work.

Several other media outlets have covered the new Bonneville Launch in great detail, however I’ve yet to see accurate pricing or horsepower specs, but I figured I’d share more imagery with the masses. 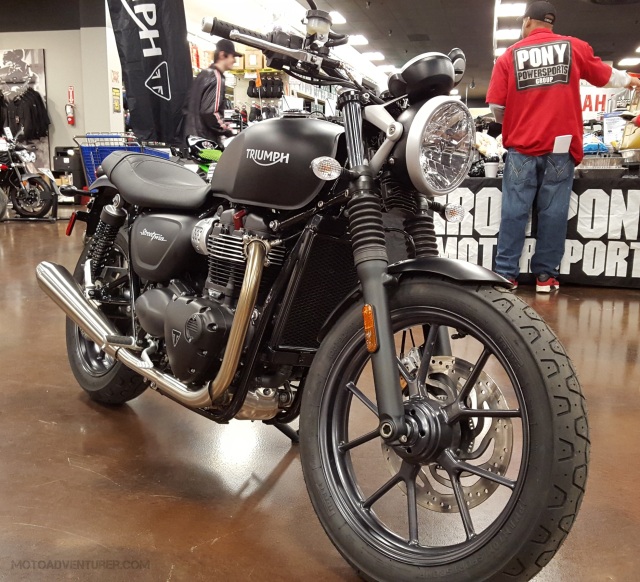 The new blacked out engine is right on; classic lines and low profile. The faux carbs are a little more modern which I find “ho-hum” but the overall simplicity is good.

While the exhaust looks great, there’s this dirty secret, a massive catalytic converter hiding under the engine.

The ignition has finally been relocated, to the applause of longtime Triumph aficionados. I have no idea if there’s a digital tach hiding in that big speedo, but the speedo looks great regardless. At the same time, the “functional” plastic brake fluid reservoir is back, no complaints from me, but it’s often criticized in reviews. The info button has also been relocated to the left control, which is another welcome improvement to those of us familiar with reaching up past the bars to check the trip odometer on the freeway.

The fender “delete” kit is a popular aftermarket solution for many Bonnie owners; I have to hand it to Triumph, they did put some serious effort into minimizing the formerly clunky fender.

The true genius of the new liquid cooled engine is hiding the radiator in plain sight. Lots of manufacturers have tried to cover the radiator with chrome and whatnot, but Triumph simply bolted the black simplicity on the front of the frame and left it alone. 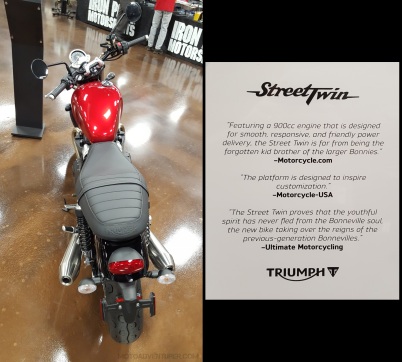 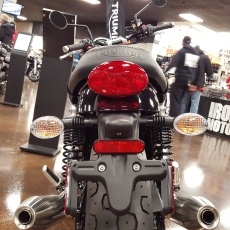 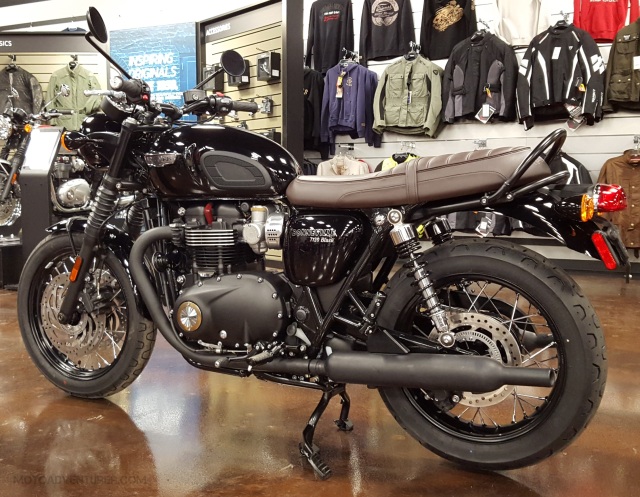 I’ve been looking forward to a 1200 cc solution for the modern classic Triumph for a long time.While liquid cooled isn’t necessarily my first choice, it looks great, and I’m sure the stats will speak for themselves.

When I’ve shown them the photo; the new T120 has fooled a lot people into thinking it’s a lot older at first glance. 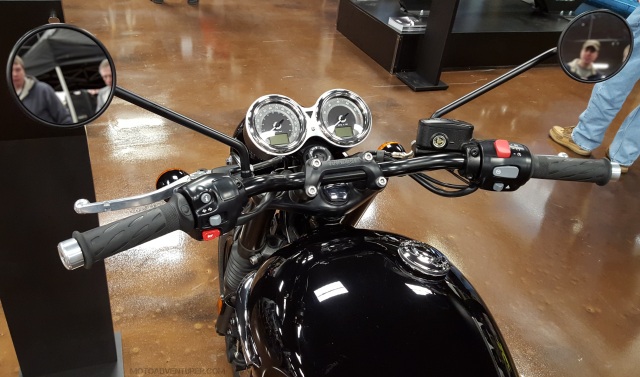 Looks like Triumph pulled out all the stops and loaded these new 1200’s with farkles that are normally add-ons (heated grips are coyly hidden). 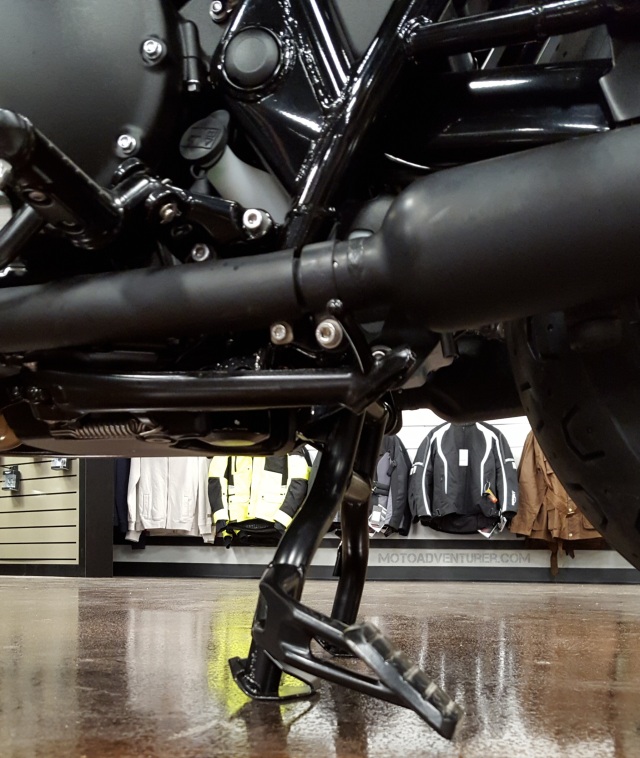 Center-stand included as standard is another awesome add-on (coming from a guy who does all his own maintenance).

The new LED Daylight Running Lights are real sharp, hopefully these new lamps throw some good light down the road.

The T120 Black is definitely my favorite of the new line; the classic looks, blacked out pipes, included options, along with the almost complete absence of shiny stuff, it’s a slam dunk. 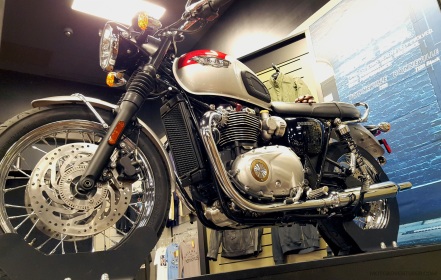 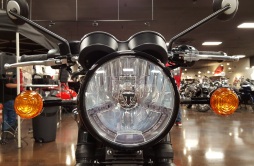 …no show… I guess Triumph figured everyone is going to spring for the R spec?

The popularity of the new Thruxton R pretty much speaks for itself. Thruxton enthusiasts have been modifying their stock rides to improve the “entry level” prowess with sportier kit for years. The Thruxton’s liquid cooled 1200 is stamped 1200 HP, not sure what that equates to just yet, but the torque stats look pretty good. 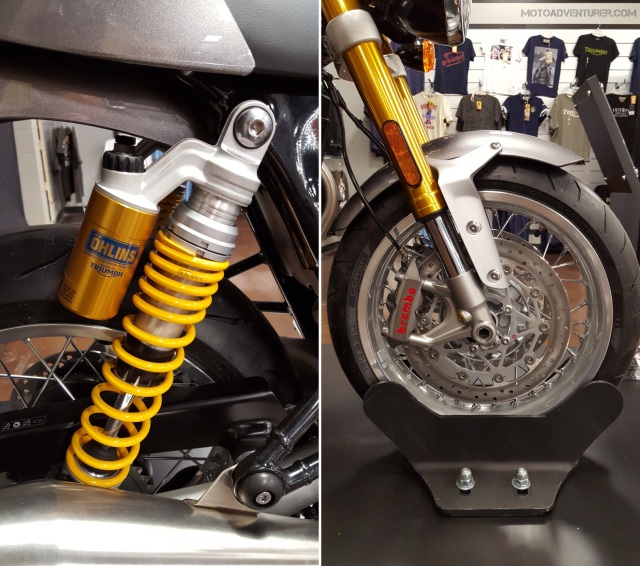 Ohlins rear suspenders and adjustable Showa front forks come stock out of the gate, as do a set Brembo radial brakes. Spoked 17 inch hoops come fitted with Pirelli Diablo Rosso Corsas (Pirelli seems to be the new OEM choice for all 6 new models, retiring Metzeler from years past). 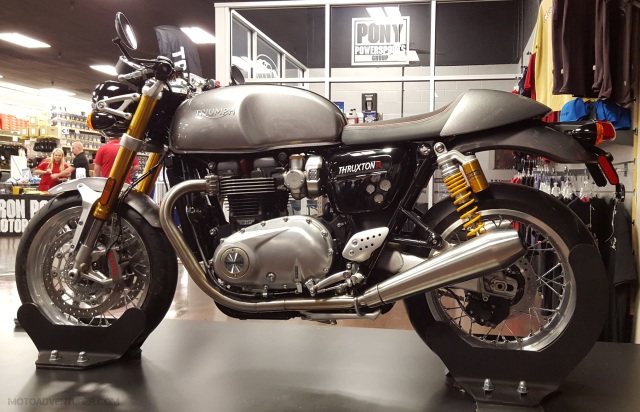 The old-school café racer tank with flip up gas cap is another classy touch. 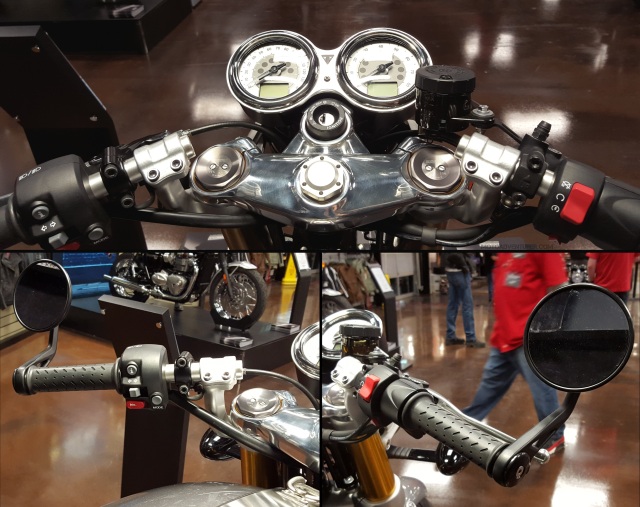 9 Responses to The Triumph Bonneville Reborn