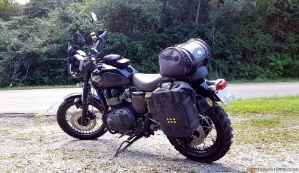 It’s that time of year again; my clothes are packed, the tool kit is ready, the bike is loaded, and I won’t sleep a wink tonight with all the excitement. This year will make my fourth year at the Triumph Dragon Raid; my annual fall vacation to Deal’s Gap, North Carolina. The past two years I’ve been doing my homework while tagging along with friends. Last year that resulted in a whole lot of ad-hoc hooliganism, and unfortunately a few repetitive rides (I think I hit the Skyway 3 times). In talking with friends, we wanted to have a “plan” this year, that way we could actually wake up and head out to ride after breakfast and forgo the usual “him-haw” session. While I full well expect Hurricane Irma to put a bit of a damper on my plans, this year I’ve laid out several routes nonetheless.

Tail of the Dragon and the Cherohala Skyway: The Staple.

It’s pretty much guaranteed I’m going to give The Dragon and the Skyway at least one run while I’m down that way. I admit, I still prefer North Carolina Route 28 to the Skyway, but it’s an easy loop to put together, and the pavement on the Skyway is new and at least “bedded in” this year (it was fresh and “oily” last year).
Skyway Loop GPX
Skyway Loop Rever Route 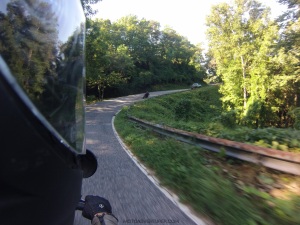 I was introduced to Wayah Road two years ago on the Speedmaster, and it was somewhat of a hair-raising experience considering the steep downhill slopes with hairpin turns at the bottom, especially with the “spongy” front suspension on the Speedmaster. I had hopes of revisiting Wayah Road last year on the Scrambler, but it just never materialized; I have plans to make that happen this year if the rain holds off. The big bonus for the Wayah Road loop is of course another trip down “Moonshiner 28” (NC-28) from US-74 to Franklin, which I consider a “Must-Ride” if you’re staying at the Iron Horse.
Wayah Road Loop GPX
Wayah Loop Rever Route

Last year my buddy Tom suggested that I may want to tackle the “Gravel-Hala”, a gravel forest “fire road” that parallels the Cherohala Skyway. I admit, I have only heard a few rumors about the ride, but ultimately I figured it would be a decent “easy to intermediate” dual sport route for the Scrambler to tackle. The bonus would be to land a good photo of Bald River Falls on the west end of the loop near Tellico Plains. Worst case, if it’s a boring gravel road (yeah right… just ride faster), I still land Krambonz BBQ out of the deal.
Cherohala Dual Sport GPX
Cherohala Dual Sport Rever Route

If the stars align and the weather holds, I have aspirations of riding into South Carolina this year. I get sick kicks out of “checking-off” new states that I’ve ridden in. At only 210 miles round trip from the Iron Horse, I can even nab that tallest point in the Palmetto State in the same day; while still hitting NC-107, NC-215, and even the Blue Ridge Parkway in the process. If things are going really well, I may even throw in some Bureau of Indian Affairs forest service roads on my way back to the lodge.
Sassafras Mountain GPX
Sassafras Mountain Rever Route

While I did accidentally venture into Georgia last year on NC-28, it was short lived. After a little research on South Carolina’s highest point, I was surprised to find that Georgia’s tallest point is also easily attainable on a 230 mile loop from the Iron Horse. A ride down to Brasstown Bald even means a trip across NC-28 and Wayah Road to boot.
Brasstown Bald Loop GPX
Brasstown Bald Rever Route 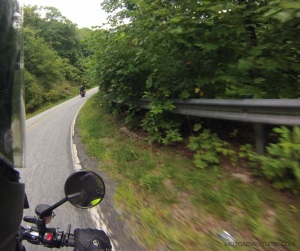 Despite my eagerness to sink a new set of knobbies into the soil, I can’t deny that I want to take another trip down Explorer Road; a road my buddy Tom affectionately refers to as “The road that tries to kill you.” Obviously I love NC-28, but NC-281 and US-276 are also some of the most challenging roads you’ll find around The Dragon. The longer I ride the more I find my preference shifting to “remote” and rural roads, Explorer Road is just that. Linking 281 to NC-215, and barely two lanes, Explorer Road coils and bends along the Appalachian mountainside like some of the most gnarly roads in the West Virginia; just watch out for those decreasing radius curves.
Kitchen Sink GPX
Kitchen Sink Rever Route

I think it’s safe to say, this is a pretty “Tall Order” considering the impending mess that Irma is likely to rain down on “The South” (never mind the unfortunate damage she’s going to do to Key West and the rest of Florida, my heart goes out to those folks!). That said, in the event things go sideways, I’m still hoping to get Rosie out on some of the trails; rain keeps the dust down right? Either way, I have these routes loaded up in Rever on my cell phone, and I’ve even put together a share folder on Google Drive for the GPX files so more of the attendees and load them onto their various GPS devices.

We’ll see how things go, hopefully I’ll find some of you down that way this week, and to the rest of you, I’ll hit you up with photos and ride reports in a few days!