Red River Scramble: Where to Ride 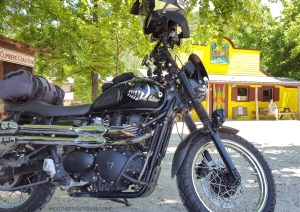 The Red River Scramble “Meetup” is just a few days away now. Per my comments, I’ll be at Miguel’s Pizza Saturday morning (7/22/17) for breakfast, from there I’ll direct folks to the type of riding they’re looking for, and I expect I’ll meet up with a few folks for a ride just after noon. In order to make things easier for first time visitors to the Gorge, I figured I would cover a few of the routes I’ve put together for the weekend. The following routes (and others) are posted on the Red River Scramble REVER group, and GPX Files are stored in a Google Drive Folder.

First time visitors to Red River Gorge should not miss out on the opportunity to see one of nearly a hundred natural arches hidden around this part of Kentucky. While Natural Bridge is unquestionably one of the most popular tourist destinations in these parts, I recommend Sky Bridge to the motorcycle crowd. Natural Bridge is larger, and may arguably have a better view (arguably…), but if you’re dressed in motorcycle gear, the one mile hike to the top, or even the sky lift may be a bit warm.

Sky Bridge on the other hand means you get a chance to take in a nice twisty ride around Kentucky Highways 15 and 715 and take a short walk out to the Sky Bridge to see majestic views of the gorge. Headed back down 715 you turn down 77 and take a trip through Nada Tunnel before heading back to the start point to meet up with other riders and head back out for another adventure.

Folks that are looking to dispense with the pleasantries and get on with the scrambling need look no further than the DBBB.

From my Moto Bucket List, the DBBB is a 100 mile dual-sport loop around Red River Gorge, about half of which is off road. Early this spring I tackled a little over half the DBBB and “proved” most of the attached GPX file. At the time, part of Furnace-Pilot road was closed, but I believe this GPX track is correct. However, I will need folks to run the southeast portion along Devil

Creek and confirm if this track is as close as I think it is. I suspect that considering the limited time, it will be difficult to finish the entire loop in one afternoon, however riders with more off-road prowess than myself may get it done. I recommend heading north up KY-77 through the tunnel and then running the route counterclockwise, hitting Spaas Creek road first; that way you get through what I consider the harder (and most fun) sections before dark. For folks that want to tackle sections of the DBBB, but want to step up incrementally in difficulty, I have also built GPX tracks of the sections I have done, labeled “Easy”, “Medium”, and “Hard” (GPX Files found here).

If you’re looking to skip the tourist stuff and get straight to the canyon carving, this is a good start. Headed east out of Slade, KY-15 will take you over KY-746 where you can enjoy a fine “Kentucky two-lane” through rural backwoods farms, scattered forest, blind rises, sweeping s-turns, and unmarked curves. From 746 you’ll take a short jaunt across US-460 to KY-77, my favorite road in the gorge. KY-77 heads south from Frenchburg down into Daniel Boone National Forest (DBNF) and through Red River Gorge.

Up on the “Tarr Ridge”, 77 flows along the ridge line with wide, banked, sweepers you can see through; those sweepers start to give way to blind rises and tighter curves until 77 drops into the gorge and under the tree canopy. Once inside the DBNF boundary, the curves get tighter and blinder as you twist your way past 715, along the cliff-line and through Nada Tunnel. If you’re only going to ride one paved road while you’re in the gorge, 77 is that road.

For folks that have packed their hiking boots and are looking for the ultimate scenic experience, I have combined the Sky Bridge loop with the gravel hiking trail access roads. 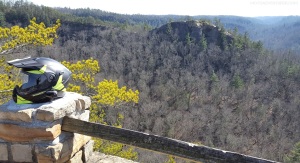 From the Chimney Top Rock parking area, ride slow about a half mile south until you see trash cans and a port-o-john to your left, there should be unmarked trail access to Half Moon Rock immediately to your right. From the road the trail goes about 650 yards until you get to the climb, from there look closely at the rocks for existing hand holds and footing for a short climb to a majestic, unobstructed, 360° view of the gorge. For folks that are looking for more deep woods hiking, be sure to take a ride up Tunnel Ridge Road, not far from the Slade gas station off KY-15. From Tunnel Ridge Road hikers have access to Gray’s Arch trail, D Boon Hut trail, and the Auxier Ridge trail. 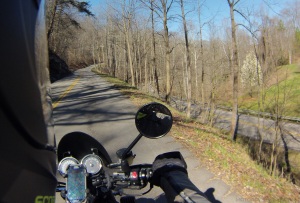 Road warriors that are looking for a grand tour of the bluegrass should load up the southeast loop. Again, headed east down KY-15 and on to KY-191 out beyond Campton, riders will arrive at Kentucky Highway 1812. I find there is a general rule of thumb in these parts, the more digits, the more rural the road, which typically leads to larger helpings of twisty pavement, 1812 is no exemption. Possessing no less than four hair-pin turns, 1812 starts out somewhat benign as it gently traces along creek beds and farms; as you progress south, 1812 winds deeper and deeper into the Appalachian foothills. Before long you find yourself riding up a steep elevation change which gives birth to twin switch backs; be warned, there’s a driveway hiding about mid-turn in that last one.

Once down from the top of 1812, riders can catch a bathroom break in Jackson at one of the local service stations. From there the route heads west across a scenic section KY-52 which runs parallel to an old rail line for several miles. Not far from Beattyville you turn north on KY-2016; easily my second favorite road in the area (others have suggested it is, in fact, the best). Twelve miles of (almost) completely unmarked Kentucky two-lane, KY-2016 slithers across “Big Andy” Ridge and has been referred to as a “roller coaster” by a few folks in my riding circle. Reminiscent of KY-746 in some ways, 2016 also runs along rural Kentucky farms and swaths of wooded areas, and is dotted with pump jacks and other oil industry equipment. From the top of 2016, KY-715 will take you west back to KY-11 and back into Slade.

(GPX File and REVER Route)
Sightseers and history buffs should be sure to take the Southwest loop. Headed west on KY-15 riders will arrive at KY-1639 and subsequently KY-1057. 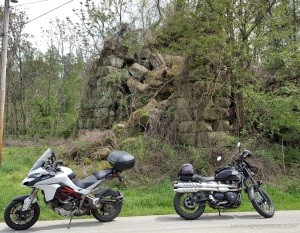 1057 is arguably the quintessential Appalachian backroad; cutting through valleys and creek beds among rural farms, trailers, and Appalachian derelicts. Barely two entire lanes, riders should be on guard for nonsensical road contours, the occasional gravel washout, wild turkeys, and even dogs sleeping in the roadway. 1057 sweeps south into “Furnace Junction” where it meets KY-213; I rode through this area many times and had no idea I was actually rolling right by a 19th century Kentucky relic. At the corner of KY-213 and Billing’s Cemetery road rests the dilapidated ruins of the Estill Furnace, remnant of the Kentucky ironwork industry, one of three furnaces in a five mile radius of Furnace Junction (I can provide GPS coordinates for those interested in seeing others nearby). 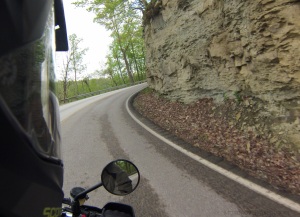 KY-213 continues southwest in very similar fashion to KY-1057; be sure to slow down as you summit the ridge line and catch views of the adjacent cliffs to the west. At the bottom of KY-213 riders will meet the sporty end of KY-52 just out of Irvine. KY-52 headed east into Beattyville is arguably the fastest and most well-manicured road in the area. Along 52, riders will find some of the largest changes in elevation in the area, gorgeous vistas of the cliffs and foothills, and another smattering of bluegrass farms. KY-52 takes riders back into Beattyville where they can pick up KY-11 and swing back north to Slade.
While not included in the route, not long after turning onto KY-52, the before mentioned sightseers should take KY-975 (gravel) north up to the Fitchburg Furnace, one of the largest charcoal-fired furnaces ever built.

While attendees will unquestionably not complete the entire ride in a weekend, off-road 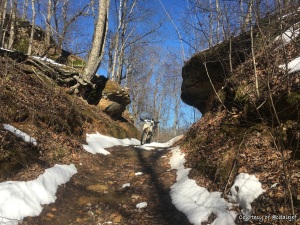 and adventure enthusiasts should still check out the Kentucky Adventure Tour (KAT). The KAT is a 1,000 mile dual-sport route around eastern Kentucky including parts of Virginia, West Virginia, and Tennessee. The DBBB and the KAT overlap for a short section in the north, but the KAT has extra “bonus” (hard) sections that are easily within range of the Red River Gorge area. If folks have the vacation time, this weekend is as good a time as any to start out in Slade and tackle the KAT the following week. At a minimum, off-roaders should download the KAT GPS tracks from Adventure Rider so they have access to the hard sections. 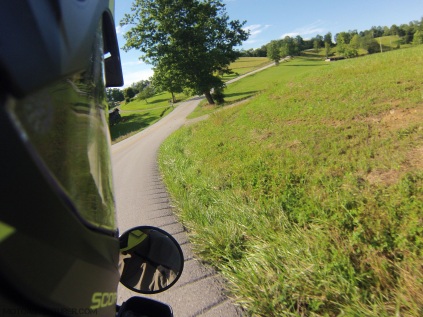 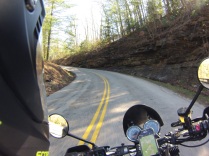 4 Responses to Red River Scramble: Where to Ride