What do you want from Harley-Davidson?

Early this week I caught this news snippet regarding Harley-Davidson’s announcement about the closure of the Kansas City manufacturing plant.

That news, while tragic, is unfortunately not particularly surprising after so many recent articles have been written about declining sales from the Motor-Company. Similar to when Polaris shuttered Victory’s doors, social media platforms are on the verge of a full-blown meltdown from the sheer volume of comments on the subject. Many folks see the recent news as chickens coming home to roost, others echo the sentiments that millennials don’t understand the value of the American motorcycle, while others suggest it’s merely the ebb and flow of the market. I’m of course not innocent in all this; I’m sucked into the Harley discussion the same as the next “biker”. I admit, I don’t know what’s going on, I don’t know what’s going to happen, and I can’t help but offer my two cents. Thus, I ask the question, what do we want from Harley-Davidson?

When I first started “shopping” for a new motorcycle, I won’t say that I eliminated Harley-Davidson from the search, but it quickly became evident that there were other options available. Price was a large factor, but I admit, I was also looking for something “different” than what a lot of other motorcyclists were riding. As an opinionated, “rebellious”, new rider that knew everything, I once thought I needed to defend this “anti-Harley” stance, yet in recent days, I’ve actually come to terms with reality, and recognize what Harley has to offer, even if, perhaps, they have not.

After rubbing elbows with a wider, more obscure portion of the motorcycling community, 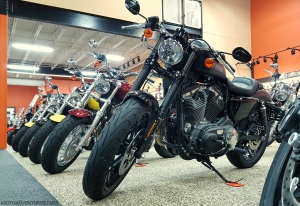 I have begun to appreciate that each motorcycle is a tool, and in turn different tools have different jobs. Despite the polarizing nature of the “Bar & Shield” label, I believe that cruisers, and more specifically, Harley-Davidson has its place in the market. That said, current market trends seem to suggest that Harley is either not delivering what new buyers want, or has perhaps over saturated the market. I’ll admit, I’m no economist, for all I know this news is simply the first of many sad stories for all the manufacturers as the motorcycle market is contracting as a result of stagnant wages and disinterested buyers. That said, I feel it’s worth throwing the “Home Team” a bone and at least telling Harley-Davidson what we’re looking for from their brand.

Some will say they want to see Harley-Davidson launch a sport-naked (despite that whole Buell thing), design a new engine, and in a resounding voice, ditch all the excess steel. Whereas I would applaud such an effort,

I actually think Harley has the all the tools, and the DNA to deliver an adversely different product, while only making minor changes. While dual overhead cams, liquid cooling, and over-square engine architecture are often thrown in the face of the low horsepower “Harley crowd”, I personally think that many dismiss the convenience of maintenance simplicity offered by the modern Harley engine. As I found myself poking around in the Scrambler’s valve train on three occasions in a year’s time, let me tell you, the concept of self-adjusting hydraulic tappets starts to sound a pretty appealing; at least for the daily commuter. Beyond maintenance and engine simplicity, and despite the unending jokes of American V-twins “marking their territory”, I consider the modern Harley engine to be relatively reliable. There is no question, modern bikes of all makes have fallen prey to a myriad of recalls in recent years, but where the power plant is concerned, I suspect and Evo engine will treat you right. Look, I don’t want this to sound like a cheerleading bit for Harley-Davidson, I merely want to set the stage for the changes I want to see going forward. Thus, without further ado…

No seriously, I want to see real diversity. When I first started seriously looking at buying a motorcycle, Harley-Davidson sold five motorcycles; the Sportster, the Dyna, the Softail, the Electra Glide, and depending on who you ask, the V-Rod. With the advent of the XG series “Street” models, that expanded to six, only to be rescinded to four with the retirement of both the V-Rod and the Dyna. Late last year Harley was pushing the #FreedomMachine “What’s In the Box” campaign.

I was really excited, with the promise of releasing 100 new models over the next 10 years and considering that the Milwaukee 8 was already “a thing”, I assumed Harley had finally revamped the Evolution engine and we were finally going to see a new Sporty. Instead, we received EIGHT Softail models… with a ninth that followed shortly thereafter. Don’t get me wrong, I welcome the new Softail models, especially the new Fat Bob, but nine flavors of essentially the same bike is downright ridiculous. In a world where a new Harley is viewed as a “blank canvas” for customization; were exhaust, bars, and leather seats are throw-away items that are expected to be replaced at the parts counter, I fail to understand the need for nine iterations of the same chassis straight from the factory. The Softail Slim, Lowrider, and Street Bob are now essentially the same bike with marginal differences. I full well understand that engineering takes time, and that there’s a flavor of motorcycle for every motorcyclist, but considering the availability of OEM and aftermarket parts for Harley, why do we need to slice the pie so thin?

In recent years I feel like Harley-Davidson advertising is borderline mocking itself. “Feel the Freedom”, while not a true Harley tagline, seems like the quintessential Harley advertisement. 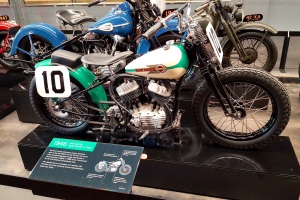 Meanwhile, “Freedom Machine”, “Resistance is Futile”, “Don’t Wannabe”, and “Roll Your Own” are actual H-D slogans. A while back I caught this satirical bit about the MoCo; “Heritage” and “Tradition” are used excessively to mock the brand. From the 90’s up until very recently, marketing has successfully lifted Harley to the powerhouse it is today; essentially selling “toys” to droves of consumers. I do not begrudge Harley-Davidson their success (nor the customers who love their motorcycles); I do however think they have another card in their hand to play. Here in America, there was a point in time where Harley was synonymous with rugged machines and equally self-reliant, adventurous customers. 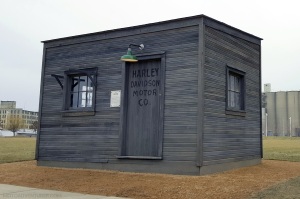 Over the holiday break I finally caught “Harley and the Davidsons”; while fictional, I couldn’t help but be nostalgic about the competitive and “independent” beginnings of motorcycling in this country. I think the Motor-Company needs to leverage that idea to market and sell a bike that is properly suited more toward those interests as “Adventure” seems to be the portion of the motorcycle market that has expanded in recent years. The Milwaukee V-twins sold today are still easy to maintain, but the overall structure of the bike is a little less inviting when the pavement becomes less than ideal. I believe Harley has the tools to remedy this situation, with merely subtle changes.

In recent years, Harley has edged closer and closer to selling a neutral seating position “standard” motorcycle. The new Roadster, which I’ve discussed at length, and the new Street Rod are welcome steps in that direction, but both seem to lack full commitment. 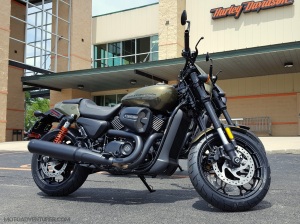 Be it poor positioning of controls, or just poorly executed rider triangle, both bikes are on the verge of offering riders an alternative to the typical laid-back Harley ergos, but fall just short. Per my previous comments about “minor tweaks”, the Sportster frame with minimal “massaging” could easily give birth to a factory standard, if only the auxiliary parts would follow suit. With regard to the Roadster, I mentioned this directly to the dealer when they were pushing the sale; ultimately I simply think it’s bad business to sell a bike to someone and immediately turn around and charge them for extra parts to “finish” what the brand started. While I understand each rider’s comfort and stature are different, at 5’10”, 185, I view myself as the “Average Joe”, and I’m unquestionably not the first to comment on the “odd” ergonomics of both of the before mentioned models.

Harley has heritage in spades; bring back that dirt legacy to the showroom floor. Way back when (…way back), motorcycles were once the only means of transportation for some folks.

Needless to say, a lot of dirt roads were involved, which I suspect probably has a few things to do with the continuation of modern hill climb and dirt track racing. Despite that rich history, Harley really doesn’t sell a dirt worthy motorcycle. Don’t get me wrong, I don’t expect the Milwaukee marque to up and build a modern dirt bike with twelve inches of suspension travel; nor do I expect them to throw their hat into the ring with a large displacement Adventure bike; especially considering BMW’s level of wiz-bang-ery. No, not at all; but in an era where virtually every manufacturer is selling a factory scrambler, I think Harley has the tools to beat them at their own game, as the original “retro” and the most rugged dirt machine.

This may be a pipe dream. This may be the musings of a millennial without a clue. However I still say it’s worth a shot. I don’t want Harley to stop selling the Heritage Softail, the Road Glide, or cruisers in general. I don’t want the Motor Company reduce its quality and emphasis on fit and finish. I do however want the strongest American Motorcycle brand to continue to produce motorcycles. I especially want them to sell motorcycles that I want to own, not when I’m 50, a motorcycle I want to own right now.

The future is obviously uncertain, and this is only one man’s opinion. So…

What do you want see from Harley-Davidson? 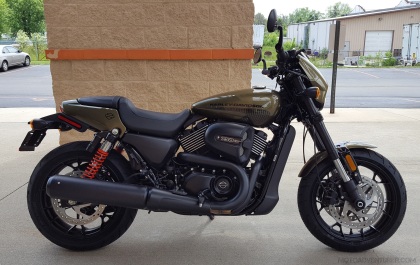 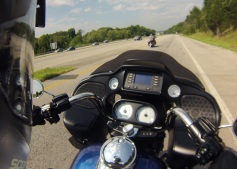 33 Responses to What do you want from Harley-Davidson?