Late last summer I decided it was about time to replace my aging GMax helmet. While it wasn’t particularly old, it was getting no shortage of use and then it managed to take a dive off the handlebars one day which pretty much sealed the deal.

As I mentioned, I was a big fan of the GMax GM54S; I really like modular helmets, and I don’t think I’ll ever own another helmet without an internal, drop-down, sun visor. While I don’t ride beyond the parking lot with the chin bar up, I like modular helmets because they make it easier to get “kitted up” in cold weather when I’m trying to don a helmet while wearing a neck gaiter. I’m also a huge proponent of the internal sun visor; while a lot of folks will fuss with carrying and swapping a smoked shield for sunny weather, I find tunnels and shaded valleys a bit challenging in low light and just prefer the convenience of built-in “sun glasses”. While I had been eyeing the Icon Variant for a really long time, it regrettably lacks the internal visor that I love so much. Fortunately, not long before deciding that the GMax was officially done, I stumbled on the new Scorpion EXO-AT950.

If you haven’t already noticed from the photos, the EXO-AT950 is one of the newest additions to the “ADV” helmet scene with its Master Chief-like peak visor, while also one of the only modular adventure helmets that also includes the internal, drop-down sun visor.

The helmet has a polycarbonate outer shell in sizes XS up to 3XL, clear polycarbonate visor, has an intermediate oval fitment, and weighs just under 4 pounds. The new Scorpion ADV lid has a dual selection chin vent and a peak “chimney” vent. The peak visor is actually removable, and Scorpion also includes a set of side shields that retain the outer visor in lieu of the peak visor assembly. The visor opening was also designed to be large enough to offer riders the alternative of wearing goggles with the clear visor up (or removed). MSRP for solid colors runs around $270, and for an additional $20 buyers can get silver, orange, and Hi-Viz Yellow; and now Scorpion has even launched the new “Battleflage” which was unfortunately not yet available when I bought mine. 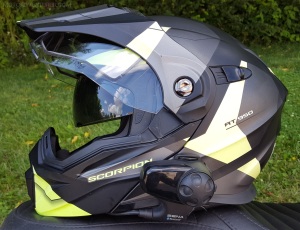 It goes without saying, I’m a big fan of the modular design and the internal sun visor. While it’s not ambidextrous like the GMax, I have come to appreciate the simplicity and placement of the internal sun visor actuator on the left side of the helmet. It takes a bit to get used to, and very difficult to do with your right hand, but once adjusted, it takes very little effort to drop the sun visor and honestly it looks a little “cleaner”. I could also mount my GoPro to the top of the helmet now if I wanted to, something that was a little trickier on my old Gmax. 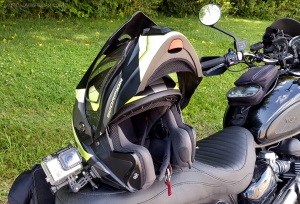 The chin bar lock release button is probably the best I’ve used on a modular helmet. I found the release on the GMax to be a bit awkward as you had to pull the release down and lift the face of the helmet, whereas the Fulmer I had could almost be “knocked” open if you hit the chin bar with your wrist hard enough. Scorpion has successfully tucked away the red release button so that it’s not actuated by accident but also flows in a natural motion when you want to lift the face of the visor.

I love the AT950’s peak visor; I ride east to work in the morning and dead west to head home every day from the office, which usually means I’m staring dead into the sun for several weeks each year. The peak visor adds just a little extra shade to that commute, and it’s even better when the clear visor gets dusty from riding the trails. Folks should know, the peak visor does “drag” a little bit at high speeds, especially when you’re doing head checks for lane changes, and it also exacerbates buffeting on the freeway, so I take it off and install the side shields when I’m planning on spending more than half an hour on the highway.

The Field of view in this helmet is simply massive; I couldn’t get over that after wearing the GMax for so long. Ultimately this is a byproduct of the fact that you can raise the clear visor and wear goggles with this helmet. Most adventure helmets, like the Icon Variant, claim that you cannot wear the helmet with goggles, but in this case Scorpion offered that as an additional option. Admittedly, I have not tried that yet, but I appreciate the option, and unquestionably the generous peripheral view I have as a result.

Scorpion has an “EverClear” No-fog coating that is standard on the clear visor; I find “fog-proof” to be similar to “water resistant”, which usually means quite the opposite. Scorpion’s “EverClear” coating is actually quite effective in late spring, summer, and early fall, but I’ll touch on that in a moment.

Lastly, beyond function, the AT950 obviously looks the part of an “Adventure” helmet; while not quite as “Master Chief” as the Moto Vlogger favorite, the Icon Variant, the 950 is very reminiscent of motocross helmets, including flashy graphics, while offering the creature comforts of a touring helmet.

Putting the helmet on for the first time, riders will find that the cheek pads are pretty tight. I have heard mixed reviews from other owners, some have said they contacted Scorpion and received a thinner set that were more agreeable, however my close friend received an even thicker set and was left to modifying the foam in the original set. I personally found them to break in just fine after a few hundred miles, but I’m also the “Average Joe”, at least in stature. Ultimately you want to make sure you check the sizing chart very closely; it sounds like the AT950 typically runs a shade small for most folks.

In addition to the slightly constricting cheek pads, I’ve found the ear “ports” to be a bit shallow compared my previous helmet. This causes some aggravation as the speakers for my Bluetooth communicator make contact with my ears in the Scorpion from time to time, whereas I never had that problem with my previous helmet. 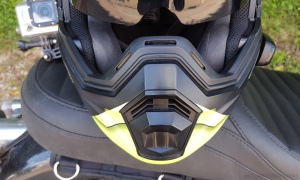 While the vents are easy to manipulate with a gloved hand, at no point have I ever intentionally closed the chin vent. The peak vent moves so much air I can actually feel my hair (what little I have left) moving from the wind force. That said, The EXO-AT950 does not move quite as much air as my old GMax. On the flipside that lack of ventilation probably means less road noise, but considering I wear earplugs and use a Sena headset, that’s kind of a moot point. I’ll admit that I prefer a lot of airflow over my face when riding, so it may just be me, but at a minimum, I think the helmet could be improved by a little more ventilation to the visor. 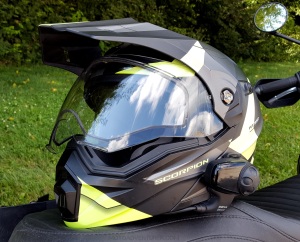 On the same note, I like to click the visor open one notch when riding in the summer to get a bit more air in the helmet. The first notch on the AT950 means that the visor is “cracked” almost a solid inch, maybe more. That’s a massive amount of air, and it’s shooting almost directly in your eyes, even with the internal sun visor down. I actually “notched” the teeth on the visor mechanism so I could reduce that opening just a hair (that may have adversely affected the rain seal).

Perhaps a petty gripe, but you need a coin or a really thin key to remove the screws from the peak visor to install the side shields. It’s not overly difficult, and I imagine it’s somewhat of an industry standard among other brands, but my old helmet had an internal, no-tools-necessary actuator to swap visors. 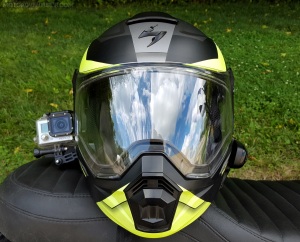 Related to ventilation and despite the “no-fog” claim, the EverClear coating is simply not strong enough to stand up to Ohio winters (mind you, I’m a bit extreme). Again, it does a great job in warm weather, and even in the low 40’s it’s pretty decent, but below that, or any time it rains, the visor fogs up. Similar to my GMax helmet, I went ahead and spent a few extra bucks to get a dual pane visor; that proved to be well worth it, I recommend a pin-loc or dual pane visor to anyone that rides in the rain with this helmet. Scorpion also claims that the internal sun visor also has a no-fog coating. I would stop just short of saying that’s a flat out lie; while it’s possible that I received an early model or defective sun visor, I can easily fog up the internal visor at virtually any time. While I experienced that same issue with the GMax, I do feel that with the more restricted ventilation of the AT950, it’s much more noticeable, especially in winter.

Lastly, despite how much I love the drop-down sun visor, it’s simply not dark enough. There have been a few sunny days that I’ve reached up to drop the sun visor only to find it’s already down. Before headed out on my Iron Butt Ride, I made sure I had a set of sunglasses on the bike; I’ve yet to resort to that extreme, but Scorpion could probably make a few extra bucks by selling me a darker inner visor.

Don’t get me wrong, my gripes are pretty minor, I absolutely love this helmet. Scorpion has done an excellent job at fit and finish, and I’m unquestionably a huge fan of the styling; it’s a shame I didn’t get my hands on the Battleflage graphics. My old GMax was a stellar budget helmet, and I recommend it to any new riders that are looking for the convenience of an internal sun visor, but it was undoubtedly a bit “clunky” and loud compared to the Scorpion. The AT950’s locking mechanisms, visor closure,

and fitment is more precise, and just… better. While I could stand to have the inner visor a shade darker, the convenience of the removable peak visor kind of makes up for that. With the peak visor removed, it’s almost a completely different helmet on the highway, almost butter smooth, and it doesn’t look like something is “missing” like a lot of the other ADV helmets on the market with removable peak visors. Ultimately I think Scorpion has done a fantastic job with this helmet, I obviously love the looks, it’s functional, and considering the quality, it’s a really good deal under $300.