While in the process of installing the stage 3 upgrades to the Triumph Scrambler project (more on that soon), I suddenly found the “Charcoal Canister” under the swingarm to be problematic. 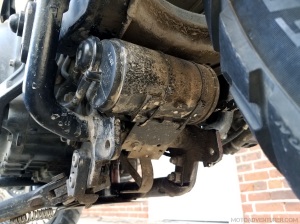 I suspected that the black cylinder hanging off the back of the frame was likely part of the California emissions package; after a Google search, that suspicion was confirmed. Unfortunately, no thanks to the Photo Bucket debacle, I found it significantly difficult to identify the steps and components necessary to remove the superfluous equipment from the motorcycle. After spending a few hours reading and exchanging information on the various forums and craning my head around in all the nooks and crannies on the bike, I put all the necessary pieces together to return the bike to the 49-State standard. For fellow Triumph twin owners, I figured it made sense to publish that process here, lest is be lost to another photographic hostage situation elsewhere.

What is an Evaporative Loss Control System?

As it is specifically related to motorcycles, the fuel tank is vented in order to equalize pressure and properly feed your carburetors or throttle bodies.

Naturally this means that gasoline fumes and potentially minuscule amounts of fuel could potentially make contact with the air, which is apparently extremely offensive to the state of California (after thinking about it, I guess that state does seem to be especially combustible). Thus a system was devised to capture any excess fuel or fumes in a “charcoal canister”, and even pump said fumes back into the intake to be burned off during normal operation.

Why would you remove the EVAP system?

I suspect there are no major side effects from leaving the evaporate system in place, at least for most motorcyclists.

The weight of the system is pretty inconsequential, and for the most part it’s out of sight and out of the way for the average rider. Some folks on the interwebs have suggested that the system could potentially create a “hard running” condition if you’re in the habit of overfilling the gas tank. However, in my case, I’ve successfully submerged the canister on multiple occasions; which I suspect has potentially caused the evaporative system to run at less than peak performance. In short, it’s not required in 49 states and it’s in my way.

Where is the system installed on my motorcycle?

I am writing this specific to 2009-2016, 865cc, fuel injected, Triumph twin motorcycles, however I suspect you’ll find that this system is mirrored on various other motorcycles irrespective to brand or model. Per my comments above, a tube is run from the fuel “vent” down to the charcoal canister. Two more tubes are ran to a “T” from the throttle bodies and down as a single tube to an electronically controlled purge valve, and then into the canister. Lastly, there’s a additional, single tube run the from right throttle body down to the canister.

How do I remove the California Evap system?

First, to familiarize yourself with the following steps, I recommend you read the previous description of the system and attempt to identify each of the components I mentioned on your own bike. 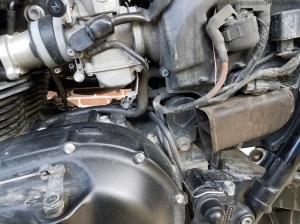 Some of these items may be difficult to see, you’ll want to remove the seat, and the left side panel from your Triumph to properly follow the route the tubing follows through the bike’s components. Before you get started, I recommend you stop by the auto parts store and pick up at least three 5/32” vacuum caps, along with a few zip-ties.

Once you’ve identified the three locations where each tube connects to the throttle bodies, look under the bike at where each of the tubes connects to the charcoal canister; be mindful that the solenoid valve is mounted above and behind the canister and may be out of sight. I would first start by cutting the two zip-ties that hold the canister to the mounting plate. Once the canister is out of the way, it’ll be easier to take an 8mm socket and remove the plate from the frame. Once the plate is off the bike frame, you can cut the solenoid valve loose from the plate, and disconnect the valve from the connector that runs from the main wire harness. 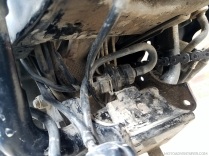 With the solenoid valve loose, disconnect the three tubes from charcoal canister and set the canister and the valve aside. Look carefully at how the remaining vent tubes are run down the left side of the bike, under the frame and up to where the canister was previously positioned. There are likely brackets mounted to the frame to hold those tube in place; these can be removed or re-used if you plan on leaving the fuel tank vent tube in place (which is what I did).

there will be a larger diameter vent tube running from the fuel tank down to the bottom of the frame. I left this tube in place, as it is run in similar fashion to the way it was installed on my non-California compliant Speedmaster; you may want to zip-tie this tube to one of the routing brackets, just to make sure it stays in its desired location.

At this point you’ve removed the major components of the evaporative system. Next you need to cap each of the vacuum nozzles on the throttle bodies with the before mentioned 5/32” vacuum caps. With the throttle bodies properly capped, the bike is once again in proper running order, however I recommend you re-locate the power source for the EVAP system solenoid. I fished that electrical connection back up over the swing arm, and into the left side cover area behind the intake snorkel. Other owners have covered the connector in electrical tape and zip-tied it under the frame; it’s completely up to you.

After re-installing the left side cover and the seat, the bike is ready to ride. Cranking the engine for the first time after removing the EVAP system, you may find that the bike idles slightly differently and the throttle response may feel different. With the changes to the intake system, you may need to adjust the idle knob to get the engine back to the desired idle speed (I usually hover around 1000 RPMS). If you find the throttle response a little sluggish at first, take the bike out for a ride and get it up to proper running temperature. Afterword you’ll need to park the bike and let it cool back down to ambient temperature. 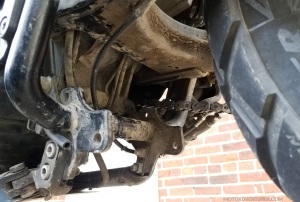 You’ll need to do this “heat cycle” at least three times as the ECU is re-learning the throttle map based on the new operating conditions. After about three rides, the bike should perform just as it did prior to the canister delete. It was about 40°F when I did this modification, so that no doubt played a role in the engine being cranky; you may find that your bike behaves no different than it did before you removed the EVAP system. Also note, if you’re considering removing the Secondary Air Injection (SAI), I would recommend you perform the canister delete at the same time if you discover that you’ve purchased a California compliant model (and don’t live in CA).