Musings from the Saddle: Reflections on 2018

Posted on December 29, 2018 by drewkfaulkner

With only a couple days left in the year, I can’t help but to look back the events of 2018. Revzilla has their annual report card, Chris Cope has his quarterly “State of the Motorcycle Obsession”, I’m apparently no different.

At the risk of sounding like I’m tooting my own horn, beyond maintaining the Moto Bucket list, at the end of each year I like to take time to refine my goals for the coming “riding season”. While I still missed out on taking a big trip to the Southernmost Point this year, I was surprised to find that I accomplished a lot more than I thought I would. If you’ve been tuned in as of late, I spoke at length about finally finishing the Daniel Boone Backcountry Byway (DBBB) in August. With that, I imagine by now you’ve undoubtedly caught the recap of riding 365 straight days. That saga actually continued on for 468 days, but I’ll delve more into that in a minute. While the story was unfortunately lost in the flurry of spring riding commitments, in April I finally made it out to Illinois for the final Moonshine Lunch Run.

The weather was less than ideal, but it was another one of those things I just wanted to do. The crowd wasn’t as large as past years (for obvious reasons), but I still met a really awesome group of dedicated long-distance riders from New York and New England. The second weekend in April, that ride into the Land of Lincoln for a Moonburger checked the first box for a new state visited for 2018; rapidly followed by Pennsylvania for Conserve the Ride in June. Unfortunately I’ve still failed to recap the highlights from this year’s Dragon Raid, but take my word for it that during that week a buddy and I ventured down to the highest point in South Carolina, checking off the third new state for the year.

While obscure at the time, I was curious if riding every single day would have lasting effects. Realization and comprehension of those effects wouldn’t come until the streak ended in November when my wife fell extremely ill and was hospitalized. 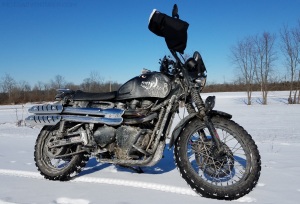 Pacing in her hospital room, I had plenty of time to contemplate the meaning of the universe, among other things. In the realm of motorcycles, the definitions of what is easy, and what is hard had shifted in my mind. Like riding a motorcycle for the first time, exposure to new things, and taking new risks, were rewarded with new skills, and a new perspective on the sport. Things previously thought to be impossible were indeed possible; barriers had been removed, and (some) preconceived notions about motorcycles in general had been dissolved. Unfortunately, a victim of the internet age, the realization that things were less black and white than ever before, started to make me feel isolated from fellow motorcyclists. Having experienced a major evolution in both skill and mindset, my eyes were opened to both possibilities, and renewed understanding that each of us has a unique taste, in both machines and leisure. Certainly this has always been the case to some degree, however, having crossed such a substantial boundary, the possibilities seemed endless. 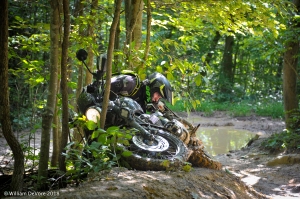 Having lost all context, terms like “beginner motorcycle”, “under-powered”, and the suggestion that every problem must be solved by spending more money, now sounded absurd. Long-term readers know that I’m predisposed to disregard conventional wisdom from to time to time; but now more than ever before, I find it difficult to accept that “bigger is always better”, price is an indicator of quality, and having the latest and greatest is what will make you happy. While certainly not irreversible, motorcycles have now been forged as both tools and avocation, a utilitarian mode of transportation while a superior means of adventure, and even an avenue to enlightenment in my eyes.

On a lighter note, I’m happy to report I’ve continued to learn a great deal about the skills required to operate a motorcycle over the past year. Around September of last year, I started practicing trail-braking techniques on the Scrambler. Rosie is a far cry from a sport bike, and my morning commute is less than a racetrack, but I rapidly grew to understand the advantages of loading the front suspension while entering the turn, versus realizing too late that I’d drifted into a corner too hot. On the other hand, literally, with the arrival of the CRF250L, I’ve realized the serious deficiency in my clutch technique. The Scrambler has immense power compared to the pint-sized Honda (60 HP vs 18).

As a result, I’d gotten lazy with the clutch, and wanted to tractor the bike in situations where “finesse” would have been a lot smoother. That’s on my list of things to perfect in 2019, but I cannot deny I’ve already started to understand how valuable the smallest amount of clutch control can be when the rear end steps out in the mud. Completing 365 straight days of riding not only showed me what I was capable of, but also made me realize how much more you can learn about riding, and how that journey is endless. I can’t say it enough, each skill builds on the previous skill, and refinement of the fundamentals exponentially improves the new skills. Riding in the dirt made riding in the snow possible; riding in the snow drew attention to my lacking off-road skills, and the cycle repeats. 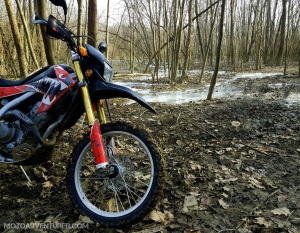 Again, per my comments on updating the Moto Bucket List, the Kentucky Adventure Tour is my biggest goal for 2019. I’ve obviously ridden a portion of the main loop by tackling the DBBB on multiple occasions, but my intention is now to spend a week in the Kentucky backcountry exploring more of the unpaved byways. Before that happens, we’re all in store for another installment of Red River Scramble this May. Not long after Conserve The Ride, I had already begun working more routes for next year’s rally. While the Kentucky Adventure Tour is the “big ticket” item for 2019, I can’t deny how rewarding it feels to expose new visitors to the best of the Bluegrass State (more on this soon).

That sentiment actually goes a bit further. Beyond inviting everyone on the inter-webs to enjoy Pizza in Red River Gorge, I’m toying with the idea of putting together some local rides to Shawnee State Forest to help expose novice adventure riders to some of the easier local trails. I’ve had a lot of conversations on local adventure forums about various riding locations, and it goes without saying I want to expose as many folks to the thrill of adventure riding as possible.

Two years ago, if you asked me what I wanted to do next year, I’d have said “ride more.” 2017 was actually the record year for mileage, but I’m here to tell you, while I love riding as often as I can, riding every single day helps you appreciate the good roads. Next year I want to be choosier about riding the fun roads, exploring new places, and experiencing more “Zen” from the saddle.

Don’t get me wrong, I’ll still be riding to work, as often as possible for that matter, but I want to expand my exposure to the remote backroads, just as I want to keep visiting new states. With that, like I said back in August of last year, I want start planning a few days of riding, not so much a destination. This year’s Dragon Raid meant riding through not one, but two tropical storms in one week. Weather in eastern Kentucky was downright stellar, while in North Carolina I spent most days dodging rain as Hurricane Florence played havoc with the seasonal weather as it approached the coast. I’ve too often been hell-bent on the “destination”, and at times forgotten to appreciate the moment. Next year I want to take a week’s vacation, and ride wherever the wind takes me; be it Bluegrass dirt, Amish country, or perhaps the Rockies.

7 Responses to Musings from the Saddle: Reflections on 2018