Where Do You Park Your Cell Phone?

I count myself to be one of the lucky ones. I’m also a bit superstitious, an odd trait for an engineer I’ll grant you, but true nonetheless. I tend to believe there is no such thing as luck, good or bad, but as one of my old friends from West Virginia had a habit of saying “If it wasn’t for bad luck, I wouldn’t have any luck at all..’ Now, although I considered the man a friend during the time we worked together, he was actually the Journeyman under whom I completed the majority of my apprenticeship in the sheet metal business.

I came to the US from England to learn a trade after I’d earned my BEng. (Bachelor of Engineering) in Civil Engineering. I’d had a conversation with an uncle on my American side of the family a few years previously who ran a reasonably sized duct shop for a local union contractor. We figured if I got my degree and then finished an apprenticeship the timing aligned well enough to put me in a good place to take over from him when he retired in a decade and a half, the rest is history, as they say.

As it turned out the economy went south right after the 9-11 attack, and things went in a slightly different direction. Regardless, what had been indirectly reinforced when working with my sheet metal buddy, was that old-school planning was worth every minute of the time it took,

and to be sure to be thorough when doing so. Also, always have a Plan ‘B’, expend as much energy and effort and prepare as carefully as Plan ‘A’, and work in a reasonable level of ‘fluff’ to allow some improvisation if needed. To be clear, I’m not in any way recommending you overthink a situation – just be sure you cover all the obvious bases, and see what pops up during planning and reviews, and don’t forget that another pair of eyes can provide very valuable insight. Dick (- for that was not his given name. Tom was the owner, and Harry was the state of his chin, but Dick) wasn’t the best planner, and so if it wasn’t for bad luck…You get the picture by now.

During my early riding years I’d been as all young riders are, brash and carefree. I’d had a couple of semi-serious wrecks over four or five years, which with undue pressure from the other half forced me to go seek some training,

however, my biggie was not until my thirties, and it happened while I was driving a car. It involved a pretty nasty head injury necessitating a helicopter ride, a lot of second-hand blood, a week in and out of consciousness, and initially took three or four years to regain a marginal share of the mental dexterity I’d enjoyed previous to the wreck. With the advantage of hindsight and almost two decades, I’m relatively confident it actually took a good twelve years to fully recover the majority of my finer capabilities, and not have regular or semi-infrequent headaches as a symptom of the trauma.

I can draw a parallel to watching my son grow, not the headache part, but the development part. He has these growth spurts every few months, and seemingly on a different development path he has these jumps in ability, specifically related to gains in language and pronunciation.

He’ll wake up one day and speak with a clarity way beyond what he had the day before. He’ll burst out with a whole new cluster of words all at once. It’s quite remarkable to see, and what’s even better than experiencing it is knowing that he is none the wiser for it, I’m pretty sure he thinks he’s always been that way. It was almost the same for me except that I could feel the difference. I likened it to looking through a slightly misty window, it all looks ok, but when the mist burns off, it’s so much clearer. That kept happening during the first decade after my wreck. I’d wake up every few months and know there had just been a busy night in my head – lots of connections had been reestablished, and as strange as it sounds I felt so much better because of it. As seasons went by the time between those episodes became longer and longer, and by the time I write this I don’t experience the same kind of events anymore, but like everyone (I hope!!) I just have those little epiphanies after a particular rough or stressful time that remind you it’s not worth sweating the small stuff. – Keep on keeping on, they say or to repeat an overused English expression, ‘Keep calm, and carry on.’ I prefer the later, it is more in keeping with my intent of not inducing anything other than confidence, through being completely un-phased by anything that’s contrary to my ideal.

The point of all these forewords is to bring up the subject of cell phone holders on motorcycles. I see similar posts on forums all the time, and they generally take the form of these two following questions. – 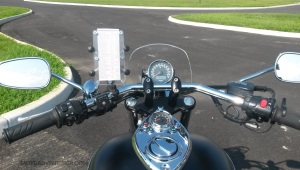 Well, here’s my considered opinion – Keep your cell phone in an inside pocket close to your heart.

Well, let’s break it down. 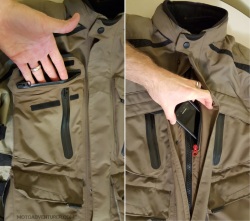 I know if it wasn’t for the cop who was in the right place at the right time to call for the Care Flight after my accident I’d be in a much worse place than I am now.

I do not want anybody to be in a position where they cannot get help as quickly as is humanly possible when they are involved in a bad situation. So, doing what you can to aid in that goal is a top priority for me. I’ll ask you if it is for you too?

Now, I know people like the convenience provided by the GPS apps on the smartphone and like to be able to see the screen in front of them rather than just listen to the voice, 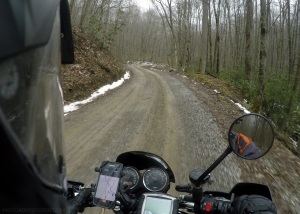 I know I do on occasion, and I certainly like to use the music apps like Pandora, or iTunes to stream music through my headset. This can have the effect of reducing battery life quickly, and I am fully conversant with the argument of cost vs the cost of a Garmin or Tom-Tom, and/or the time saved by not having to plan a ride on a PC/Mac and then upload it to your chosen GPS. That’s why I’m kind of conflicted when I see the newer motorcycle specific apps that are appearing such as Rever, or CaliMoto that have the added functionality of planning routes on your computer in a web browser and being able to sync it to your phone automatically through the app or text message over wi-fi or 3/4G. I like the convenience and user-friendliness of it all, but I still believe it’s worth the peace of mind to keep that phone on my person at all times. In my view, it’s just another part of my ever expanding ATTGAT routine. Ride Safe friends.

7 Responses to Where Do You Park Your Cell Phone?