Posted on November 17, 2019 by drewkfaulkner

Over the last two years, I’ve received numerous messages and e-mails asking if license plates are required for the Red River Scramble. Repeat offenders are aware that many of the local unpaved “roads” are unmaintained and arguably abandoned, but the law still requires street-legal vehicles. I realize that there are numerous off-roaders that have designated Off-Highway Vehicles that are looking to attend the rally and want to try out some of the local trails. With that, I understand families also want to attend and are looking for a place where the kids can ride too. Last year I put White Sulfur OHV up on the Red River Scramble website as an alternative for designated OHV riding opportunities. Last weekend I finally got a chance to ride the trails for myself.

White Sulfur sits on the north end of Daniel Boone National Forest (DBNF) just south of Salt Lick, Kentucky. OHV riding inside DBNF requires a permit, $7 per day or $15 for a 3-day pass ($40 for annual pass). Last weekend I bought my pass from the Valero Station in Salt Lick, but passes are sold in alternate locations around DBNF (locations listed on the DBNF website; I recommend you call first).

From the OHV trailhead, be sure to check the map posted up on the bulletin board (or download on the DBNF website). The OHV trails are on the northwest side of the park, with separate hiking and bridle trails located on the southeast portions of the recreation area. White Sulfur’s trails are well marked with orange diamonds that form a network web covering about 17 miles of trail. The DBNF website suggests that the trails are intended for novice to intermediate skill levels (depending on conditions). Having ridden it myself, I agree with the Forest Service’s assessment. Most of the trails are hardened with a gravel base. That base is somewhat worn in some areas between recent wet seasons and certainly with the DBNF maintenance schedule. 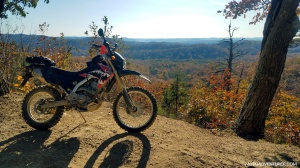 I spent about an hour and a half mapping out most of the trails on Rever (Map HERE). After spending part of the afternoon doing more recon around Frenchburg, I only managed to finish one loop around White Sulfur before the sun started to set behind the mountains. Despite my taste for more rugged trails, I’d gladly spend an afternoon scrambling over the Appalachian Foothills near Cave Run Lake; well worth the $7 entry fee.

Where to buy a pass