The long awaited dry weekend finally arrived. With spring in the air (albeit a crisp 40 degrees) I donned my armored gear and helmet and headed out onto the road. With no place in particular to go, I stopped randomly around downtown to shoot some photos. In the past weeks I’ve noticed a few different places with significant graffiti from the freeway, so I wanted to see if I

could move in for a closer look. I cannot confirm or deny the sight of any “employee access only” signs, but it was Sunday, shouldn’t the gate have been closed?

Moving on, I scooted through the historic Oregon district for a just a moment; when the sun stays out later, I expect I will cover some of the local pubs there; it’s certainly not a Sunday morning affair. I’m a big sucker for old houses, as I am for urban decay, I would probably walk around

“the Oregon” taking photos if I didn’t think someone would call the cops. Dayton actually has a substantial amount of beautiful old property, some of which is actually well preserved if you know where to find it.

After nearly combusting under the warming heat of the morning sun on my, VERY winter, riding gear, it was time to ditch the urban sprawl and get into the farm country. If I had not previously mentioned, I volunteer with a veteran focused charity called The Battle Buddy Foundation (www.tbbf.org). The Battle Buddy Foundation is a veteran re-integration charity, mostly known for their psychiatric service dog program. Service dogs can be instrumental in aiding veterans

healing from combat Post Traumatic Stress. There is a poker run benefiting Battle Buddy coming up this May that I am helping to plan, so I figured I would scout out some good back roads through Greene County. Conditions on county back roads were less than ideal, to say the least. Truthfully, I was impressed at how well last week’s light rain had successfully pushed most of the sand off the higher traffic roads. That being said, the intersections were still quite perilous, and the cars were less than pleased with my extreme caution when making turns.

As the lunch hour approached, I realized that I was a short stretch of U.S. 35 from a local pub in Jamestown. I was on site at a customer’s factory out that way a few years back when I discovered that Kelley’s Café and Pub was an excellent lunch stop. The couple times I’ve visited before, the place was pretty empty; not this day, it was hopping. Apparently it’s a prime lunch destination after Sunday morning service. Fortunately, the bar was pretty quiet; which suits me, I fit in better at the bar anyway. Grabbing a stool, I was impressed with six taps for such a small place. No complaints from me, I love Guinness and Killian’s but I was psyched to see Pabst Blue Ribbon on draft! Yes I love craft beer. 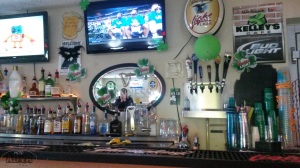 Yes I love PBR. Sorry, I can’t explain it either. Looking over the menu, making a decision was tough; I love pub food, and I had no room to take leftovers with me on the bike. Normally the wife and I will sample three or four items and split them, but that option wasn’t available. I finally landed on the Dublin Melt: Turkey, Ham & Cheese on Pretzel Bun, with onion, mayo, lettuce, and tomato; it was amazing. The Cole slaw was also decent; that’s saying something because I hate Cole slaw. The sandwich also came with a heaping pile of chips; all told this

meal could probably be split by two people who are eating light on a road trip. Even better if those two people threw in an order of the Fried Pickles! On my previous visits my tablemates have complimented their Corned Beef Rueben and Philly Cheesesteak; I’m also a big fan of their Mac & Pepper Jack bites.

For whatever reason you might find yourself passing through Jamestown, I recommend a stop at Kelley’s café. There’s a lot to choose from on the menu, the staff is very friendly, and did I mention there’s draft beer? While I’m not much a shopper, the Jeffersonville outlet mall is just “down the road”. Kelley’s might be a good place to unwind afterword, or perhaps a good “waiting” location while the significant other is shopping.

All in all it was a nice day for riding, four counties in one day, I couldn’t complain. The trip was mostly lunch and taking in the sights, so I figured I’d post a few more snapshots below. 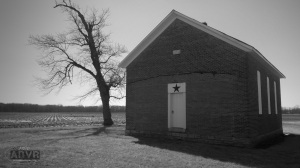