Moto Guzzi, the other Italian Motorcycle 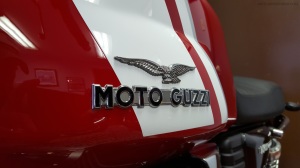 The Saturday before last (3/12) I decided I wanted to check out another motorcycle dealer in Cincinnati; I’d seen several of their Craig’s List ads and it really wasn’t that far from home. As it turns out, Cadre Cycle in Blue Ash is actually a Moto Guzzi dealer. Prior to that Saturday, the extent of my knowledge about Moto Guzzi was that they were Italian… and made bikes with transverse V-twin engines.

Pulling into the lot, I grabbed a space next to a used Triumph Trophy I had seen on craigslist. Several other used bikes were parked out front, including a recently traded V-Strom 1000. Across the lot I spotted a fleet of other European bikes, including a couple Triumphs, vintage BMWs, and even a 1000 cc Sportster; from what I could tell, they appeared to be the Saturday afternoon service backlog. Stepping inside I was greeted by friendly faces and asked if I had any questions or if I needed help finding anything. Just browsing, I wanted to see the imports up close. Next to the front desk was a 1200 Stelvio, a bike that one of my customers had spoken to me about a while back. While I’m normally all over an adventure bike, I couldn’t help but be lured into the other room by group of “neo-retro” V7 II’s.

Unmistakably, the V7 is a direct competitor to the Bonneville, a bike I want to take home someday. Prior to writing this post, I knew very little about the V7, other than it being a 750, and that it was featured in a Scrambler shootout last year. After doing a little research, I’m actually pretty impressed with the V7. Admittedly, a 750 doesn’t do a whole lot for many seasoned riders; first I feel like a standard bike is nearly impossible to find these days, moreover, it goes without saying most bikes are in the pursuit of more power. A 750 V-twin is most certainly not a power house, but weighing in at under 450 pounds, Moto Guzzi definitely edged out the portly Bonneville (over 500…). Without engaging in an argument about the definition of a “entry level bike”, I will say that the V7 seems like a good alternative for newer or returning riders, along with throwback enthusiasts like myself of course. The light weight, retro styling, copious amounts of matte paint (on the V7 Stone), combined with shaft drive are all valid selling points. That said, looking at the price tag, I suddenly see the words “import” flashing in my mind after seeing that the V7 Scrambler is nearly $1500 steeper than its British rival. Admittedly, the Scrambler also has Arrow exhaust along with Shaft drive, which is certainly expensive. Shaft drive a serious consideration for “road-only” commuters, but I question if those items are truly worth the premium, while accounting for the displacement discount. The V7 Stone on the other hand is competitively priced against Triumph’s new Street Twin. 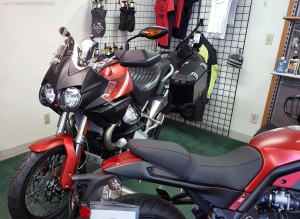 There were also several larger displacement V-twins on the showroom floor. I recalled the California 1400 from the moto-news articles when it came out a couple years back. Since I’m currently under the belief that forward controls are hurting my back, I didn’t dedicate a whole lot of time to looking over the 1400 cc cruiser range, but there are several options for folks interested in that type of bike; per usual, shaft drive may be worth the premium for some riders. I did however spend a few moments looking over the Stelvio, Guzzi’s take on the Adventure bike. The Stelvio is adorned with the usual ADV farkles, hand guards, spoked wheels, etc., and at 1200 cc, the Stelvio seems to line up pretty well against the 1200 GS and the Tiger Explorer. The Stelvio does come fitted with hard bags standard and a 8.5 gallon gas tank, pretty nice freebies at $15,990 when shopping against the competition.

While not certain, I believe the Norge GT 8V shares the same 1200 mill with the Stelvio (tuned more toward performance?). For folks looking to stick to the pavement, I’m told the Norge is a viable Sport Touring alternative. Priced at $16,290, again, shaft drive, hard luggage, and at 566 lb. dry weight, there appears to be some advantages to choosing the Norge over the more hefty ST options available. However, I suspect that like the Stelvio, the Norge also lacks electronic cruise control, which is becoming more and more standard on touring bikes.

Speaking of touring bikes, had it not been for the Triumph Trophy posted on Craigslist, I probably wouldn’t have discovered this Moto Guzzi dealer. After perusing the Italian “wares”, I spent a few moments looking over the condition of the Trophy. As luck would have it, I somehow managed to take it for a spin around the block. While I don’t know if I’m ready to commit to a full blown touring bike, I unquestionably see a the allure; electronic everything, wind/rain protection, even heated seats (which is what I call “excess”)… Yeah I think I can live with one of these. 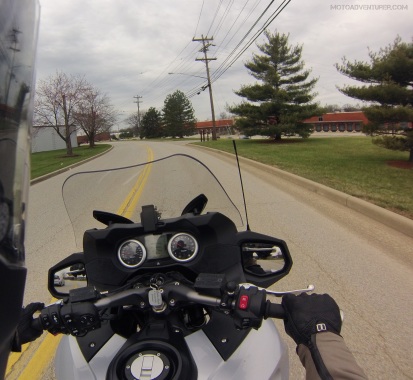 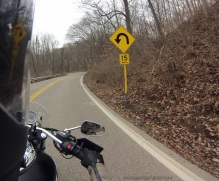 4 Responses to Moto Guzzi, the other Italian Motorcycle