A New Tire in a Pinch: Triumph Dragon Raid 2016

Now that the first snow is starting to fall in Dayton… I’m finally circling back to the rest of my photos and video from “The Raid”:

Three days of hooliganism (albeit “cruiser” hooliganism) had taken a heavy toll on the stock Bridgestone Trail Wing that came stock on Rosie. Chasing my buddy Jerry on the Skyway on Tuesday, I noticed the front end was developing an unnerving vibration at speed. Based on the heavy scalloping I could see in the tread pattern, I realized that tire’s days were numbered if I was going to keep up that aggressive riding for the rest of the week. Knowing I still had a 500 mile ride home on Sunday, Thursday morning, (9/15/16) , I decided to bite the bullet and rush over to Wheeler’s Performance in Robbinsville as soon as they opened.

While Deal’s Gap isn’t “remote” by my standards, it’s not like you can just run down the road to a shop and have a tire mounted, it was a 30 minutes ride, and the only shop I’m aware of that’s even that close to the Iron Horse. Despite my “lack of options”, Wheeler’s came highly recommended by repeat offenders to the Raid.

Pulling into a motorcycle shop on a hillside in Appalachia was undoubtedly going to be an experience. Putting the side stand down and stepping toward the garage I passed several dusty old Japanese street bikes and the obligatory dual sport parked just outside the door. 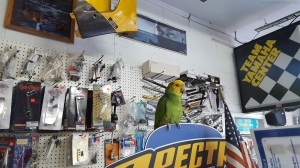 Walking up to the counter I noticed what I assume was a cockatiel (or perhaps a breed of parrot?) perched on a parts display. Ringing the bell, I was greeted by a discreet young man who was attempting to manage the flood of incoming phone calls meanwhile trying to get the shop open for the day’s work. We perused over the available tires in the size needed for the Scrambler, a list that was quite short considering I needed something right then and there. Fortunately, they did have a Michelin Anakee 3 on hand (the display in fact). I had heard really good things about the Anakee from a fellow “inmate” on ADVrider, but I admit I was a bit concerned about the quality of the tire considering how long it may have been sitting around the shop waiting for someone like myself. 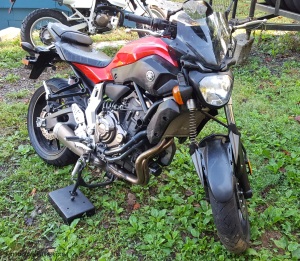 Shortly after the Scram found its way up on the lift, Mr. Wheeler himself arrived. We shot the breeze a bit while I waited; noticing several wrecked bikes parked next to the garage, we exchanged a few anecdotes about the unsuspecting moto-tourists and the decreasing radius turns in the local area. As I’ve already covered, “The Dragon” is quite the destination, as such that brings Wheeler’s quite a bit of business, unfortunately for some, at times that business is the result of someone’s poor judgement. During this exchange he said something that really struck me, “On the Dragon… Horse Power IS NOT your friend”; very true. Letting him move on to more pressing things (more phone calls), I browsed through sale parts and whatnot around the shop. 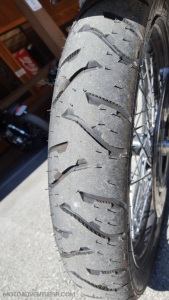 In less than an hour (in and out), the young man (whose name is unfortunately escaping me ), had the new tire mounted, balanced, aligned the front forks, re-mounted the wheel, and even lubed throttle cables. I admit that the price was a little north of what I would have paid locally in Dayton, but when you’re over the barrel and supporting a local economy that may not see as much business, it’s the way things have to go. Despite any misgivings I may have had about “shelf life”, the Anakee stuck like glue after scrubbing it in over just a few short miles up US-129 and back to the Iron Horse. Moreover that Anakee is still going strong almost 7,000 miles later, something I couldn’t say for the Bridgestone.

Back to 2016 Triumph Dragon Raid 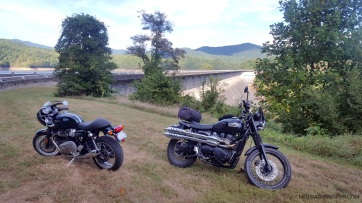 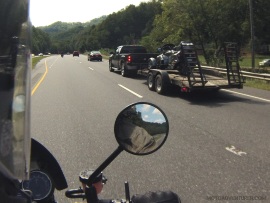 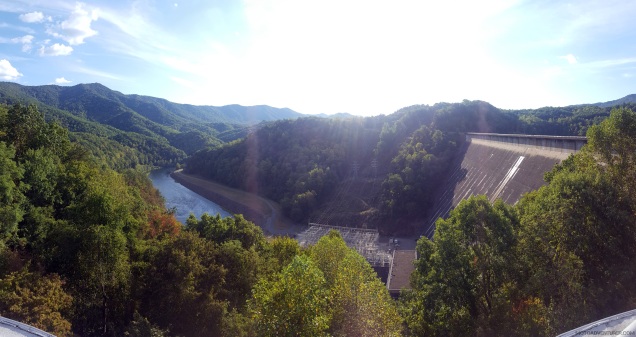 9 Responses to A New Tire in a Pinch: Triumph Dragon Raid 2016