Mother Nature is Unforgiving: The Ride

Posted on February 22, 2019 by drewkfaulkner

Do you ever have those dreams where you’re falling? It’s a horrifying sensation. Right as that twilight feeling sets in, you suddenly feel like you’re slipping away; right then you’re jolted awake, wide-eyed and gasping for air. Since I was a kid, instead of falling, that dream was reliving a bicycle crash I had in the 7th grade. As an adult, that dream has transitioned into taking a spill on a motorcycle. For some reason, the front end of the bike just lets loose from the pavement. I try to steer out of the crash, to no avail, the bike is tipping and going down. I hit the ground, which in itself would be a dramatic event, but I’m still sliding. I think I’m about to stop, so I try to stand up, not knowing how fast I’m still moving. As my boots grip the pavement, I’m tossed onto my stomach, momentum still carrying me down the roadway. Out of the corner of my eye, I see a bright orange glow. As I look up, I see sparks like fireflies trailing the bike as the two of us slide for what seems like an eternity. In just that moment, the fear lets loose for just an instant, I’m captivated by the stream of yellow and orange, like sparklers on independence day. That feeling fades as fast as it arrived, realizing I’m watching my motorcycle skid down the street as I finally started to slow.

Normally that initial feeling of weightlessness is right about where you start to wake up. Certainly, that impending impact with the ground is that point where your eyelids snap open. That didn’t happen, because this was real. Headed to work, like any other day, the front wheel let loose, and down I went.

That relentless sound of a blaring alarm clock rings in my ears as I slap the snooze button for the fifth time. Blurry eyed, the child in me finally agrees I need to get to work, so I grab my phone and turn off the alarm. I check the weather, 36°F and no significant chance of rain. Excellent, I need a good ride, and even the mundane commute to the office is a reward at this point in winter.

Showered and lunch packed, I pull on a polo shirt I should have binned months ago, and then pile on the gear to get ready to ride.

I put my lunch and dress pants in the pannier, pull on my winter gloves, boot up Rever, and push the bike out into the driveway. I look down, noticing the puddle in the driveway doesn’t have any ice on the surface.

I pull out on to my street. Passing a car at the next intersection that looked like he was going to pull out behind and follow me. I watch in my mirror, he’s still sitting at the stop sign.

I cross over the Dayton city line. The flooding is as bad as I’ve seen it before; my street has had standing water on or next to it for almost two straight years at this point.

I slow down to go throw a particularly large puddle. Know how damp the edges will be, I take my time crossing to make sure the bike doesn’t slip on ice I can’t see. The tires have lots of grip, so I cross the puddle and speed up.

After crossing another wet section of wet tarmac, I get ready to pick up the pace. That’s when it happens. The front starts to slip. I feel the slightest slip and then grip, for just a split second. Before I realize what’s happening, the front wheel is tipped beyond correction. I’m going down. Black ice.

I survived the slide. I pick myself up of the ground again, this time without being thrown back down. I don’t remember any sounds of my helmet hitting touching the ground. I look over my gear; it’s tattered, but not that bad. My elbow hurts a little, but I need to make sure I’m not struck by a car coming around the bend.

Checking myself out, I see the headlights in the distance. I flag down the car so he slows down. He rolls down the window to check on me; I tell him thanks, I’m good, have a phone and I’m only a short ride back home. When he passes I pick the bike up, pushing off to the side of the road. Watching for oncoming traffic, I pull my arm out of my jacket, seeing blood from a gash that apparently happened in the “scuffle”. I let out a deep sigh.

I kick up the kickstand and thumb the starter button; Jerri the Warhawk fires to life. I ride back to the house, realizing I’m going to need to have my arm looked at. Worse, I need to tell the wife I just took a ride down the asphalt… on my backside… That’s probably going to be the most painful part of this whole experience… hopefully.

I start pulling my gear off, inspecting my helmet, jacket, pants, and boots for holes and scratches. The hole in my right sleeve explains the gash in my elbow and the cold breeze I felt on the way back home. That freezing air sure left me with an eerie feeling, concerning that blood was pooling in my sleeve; fortunately, that was not the case. My pants have lost a couple zipper pulls and look really beat up, they were overdue for replacement anyway I suppose. The new TCX boots, however, are rock stars. The buckles have some serious road rash but the leather looks mostly unscathed. 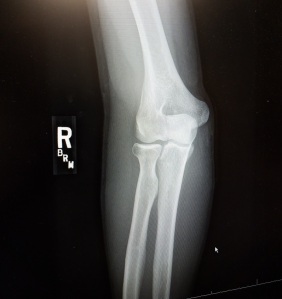 The nurse practitioner at Urgent Care sprays a little lidocaine on my elbow and starts plucking out a few small chips of asphalt and cuts away a few bits of dead skin. He cleans up the wound and tells me they don’t think stitches will be necessary; it’s just a deep gash. They take an X-ray; thankfully, nothing is broken.

When I was in the sandbox back in 2007, my buddy Sam would always say “If you’re gonna be dumb, you better be tough.” I can’t help laughing thinking about it. Falling hurts… sliding also hurts. My phone said 36 degrees at Wright-Patterson Air Force Base; well above freezing. I assumed I would be fine, especially since I didn’t see any ice forming on water anywhere else. I live right on the river, where the humidity and temperatures are drastically different than elsewhere in the city. Worse, I knew full well my street through downtown is a scene out of Mad Max (“witness me!”)… and yet I went that way anyway; simply because I didn’t want to deal with traffic lights and other drivers. Stupid Hurts.

My gear saved my hide. Those Firstgear TPG Escape pants I wrote about so long ago held together, despite the fact I’ve been mending them from pipe-burns and off-road hooliganism for the better part of two years now. The Icon Raiden jacket was also solid. I was sliding on my back and obviously had no idea how fast I was going because I was on the D3O armored back pad. My elbow took the spill because I was too stubborn to exchange my jacket a second time for a size smaller. Had the jacket fit as it was intended, that D3O pad would have been in place, and prevented my boney extremity from kissing the tarmac. My Scorpion Exo-AT950 appears unscathed, how I don’t know, but needless to say, this event is the exact reason I put this crap on every morning.

And there it is, all of the statistics folks talk about. I was on my street, less than a mile from home, and I had an “off”. Also, like nearly half of all motorcycle accidents, this event was purely my own fault, “riding too fast for the conditions”. I’ve seen ice on my street under these conditions before but figured everything would be fine. So now, the next order of business will be to take care of me; let the adrenaline wear off and make sure there are no other hidden injuries. Thanks to a set of Zeta hand guards and a Giant Loop exhaust guard, with the exception of a bent set of handlebars and rashed pegs, Jerri is otherwise unharmed (mechanically). Those sparks would have been pretty… had it not been my new toy making them. 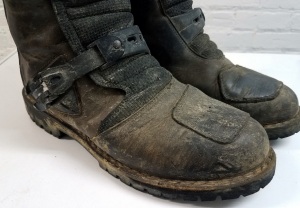 Having “Ride 365” under my belt, a few days ago I was asking myself, what’s the next challenge. The universe provides; and sometimes not in the way you want it to. I’ve had a low-speed slide in the past, needless to say, this was much more climactic. I’m arguably in better shape than I was following the first “off”, but I suspect this event will have a much deeper psychological impact than the first. I rode the bike back home, and I want to get back on the bike as soon as possible. I’m a firm believer you need to climb back on the horse and keep the demons at bay before they rise out of those dark places in your mind and wreak havoc with your resolve. Either way, it will be a matter of “learning to ride all over again”, rebuilding confidence, recognizing mistakes, moving on, and sharing the experience in the hopes I save others the pain. 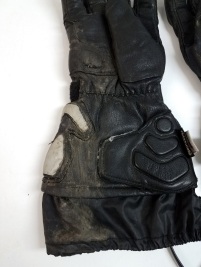 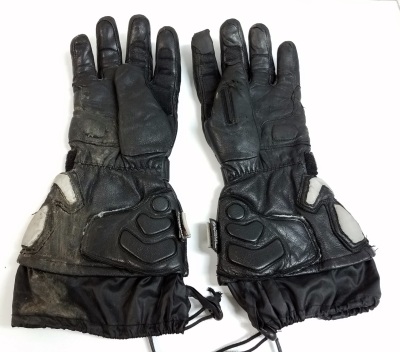 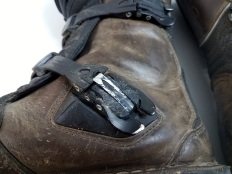 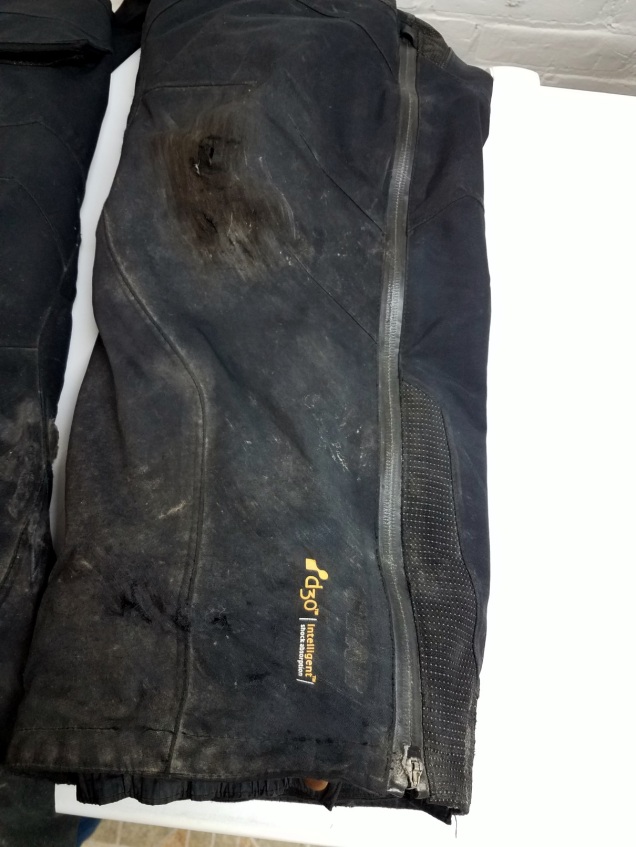 22 Responses to Mother Nature is Unforgiving: The Ride