Posted on January 1, 2020 by drewkfaulkner

Normally about this time of year, I’m sitting on the couch sipping coffee, looking out the window, watching snowflakes fall. Temperatures of have been near record highs the week of Christmas but family commitments and the joys of homeownership have spent most of the time in the driver seat. That said, I still want to “put pen to paper”, not so much to publish stereotypical “resolutions”, so much as to double down on long-standing goals that seem to have been sidelined over the last 12 months.

“Difficult to see. Always in motion is the future.”

Working out some sort of outline for this post, I went back to look at what I published this year. Ironically, the first post of 2019 was “What is the Future of Motorcycling?” That post started a trend of projects related to the motorcycle community as a whole that continued throughout the year, including a handful of other ideas that are still simmering on the back burner, anxiously awaiting a day with fewer obligations. Considering the imminent arrival of an adventure bike at local Harley dealerships in 2020; whilst, I’m looking for an affordable two-stroke, “The future of motorcycles” is still as perplexing today as it was a year ago, if not more so.

“Ride a dirt bike; it’s the most fun you’ll ever have hurting yourself”

I saw that meme a few weeks ago. I got some hearty laughs out of that one.

If you’ve been following along YouTube, my epic dismount (ejection) during the John Vincent race has become part of my new intro. 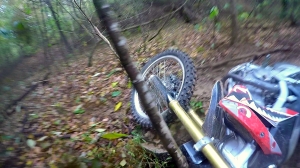 With my knee and shoulder bothering me quite a bit over the couple weeks, it was even more humorous when I realized I spent a fair portion of 2019 looking up at my bike from the ground (including about a dozen times on the most recent recon trip to the Bluegrass). Fortunately, most of the cases have been low-speed and without injury.

That said, there’s no denying the big slide last February has had somewhat of lasting effect on me. While mostly unconscious, I suspect one of the reasons I’ve spent more time in the car as of late, is because I don’t trust the weatherman much these days. It’s really interesting how “once bitten, twice shy” tends to ring true with so many things in life. Moving the bikes out to the “pig pen“, combined with heavy doses of “life” has certainly kept me out of the saddle. However, there’s no denying that when the mercury hovers around the magic temperature as it was in early December, I was pretty gunshy about riding on all those cold, damp mornings.

Video killed the radio star, but the blogger too?

Per my comments above, I’ve been wrestling with a lot of video projects as of late. I spent about two weeks shooting and editing Jerri’s long-term review.

Obviously, I’m really excited by the reception from dedicated followers, along with the rest of the motorcycle community; but at the same time, I admit I’m concerned about splitting my audience. That and trying to evenly divide my limited “free time”. Video has been a lot of fun over the last year; I’ve put a lot of effort into improving the quality of content I’ve posted here on the website and on YouTube in general. I do however find it interesting how writing and photography still seem to be a much more relaxing pastime.

2019 proved to be a year of “learning”, starting with the before mentioned crash. Once my shoulder was ready to ride again, I finally got a chance to adapt to riding a much lighter bike. My eyes were opened, not only to how lightweight motorcycles are awesome but also how weight and power have such a large impact on the pace at which you learn new skills.

That same concept is taking form off-road as well. The 250L is a lightweight adventure bike, but it’s a heavyweight dirt bike. 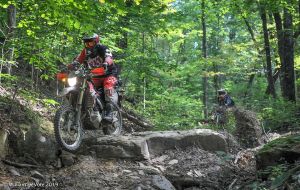 Off-road skills are obviously much different than pavement skills, and racing the TooFatty ramped up the learning curve fast. I’ve been working on a story of how off-road skills can transition to pavement skills, but not so much in reverse. Moreover, the skills and techniques learned in the dirt will make you a much more confident street rider. It’s all about managing traction… but more on that later.

Learning at this pace also comes at a price. Like riding every day, more riding means more wrenching. This year I replaced the clutch in the Scrambler, along with a host of other items I covered a while back. The 250L certainly fairs better off-road but racing is still hard on equipment. After my most recent excursion into the Kentucky wilderness, I’m pretty sure I’ll be replacing the Honda’s clutch sooner than later. It’s possible the clutch slipping is just the judder spring, but we’ll talk about that when the day arrives. Turn signals and mirrors have also taken a beating this year. A dedicated dirt bike will (mostly) fix those issues, but until that day arrives, I still need a street-legal machine that can do both.

Fortunately, with the new shed out back and thanks to a propane heater, I finally have an opportunity for “winter projects”.

Skunked… Bupkis…
…but it’s funny how things play out. I managed to skip everything on the bucket list this year, but I’m happy with how things landed. 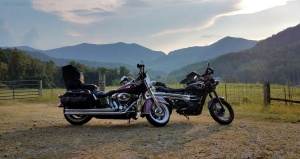 My plan was to spend a week on the Kentucky Adventure Tour in September, but instead, I spent 4 straight days riding with my Dad in some of the best roads in North Carolina (hopefully I’ll finish that story). I didn’t get a team together for NE24, but Jerri and I finished both IXCR events. Commitments and the wife’s health kept me close to home most of the year, so I focused on improving video content and delving more into “motorcycle philosophy”.

The KAT, NE24, and racing in general are my big priorities for 2020. Exploring the finer parts of The Motherland is pretty much a given every year. Given the opportunity, I want to take a trip out west to Colorado, but I’m not sure if vacation time and commitments will allow. From afar, there seems to be a distinct difference between east and west coast riding and I want to experience it for myself to understand.

So far, Red River Scramble is shaping up to be bigger than last year. Route recon and rally prep typically take up most of my spring, but I’m not complaining. 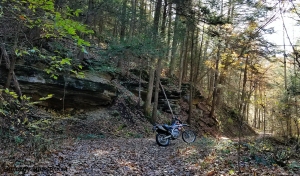 It simply breaks my heart to go ride new routes for the rally… or checking trail conditions on abandoned roads I love. Yeah, that part is awesome. Paperwork can be a drag, but most of that stuff is baked, and the reward is listening to people talk about their adventures and how much fun they had getting lost. This year I’m hoping to get more photographs of people riding and sharing stories. Either way, it’s tough to have a bad time on a motorcycle down there (assuming you know your limits).

Needless to say, my plans for 2020 are more like concepts than plans really. Not sure if that’s accepting the reality of life’s commitments or just enjoying the journey as it happens. “Letting go” has led fun adventures over the last two years, something I’m embracing with age I suppose.

So what are your riding plans for this year? New bike coming home to the stable? A motorcycle vacation you’ve been wanting to take for a while now? Or more ad-hoc rides with the usual suspects?