At dinner Saturday night I was enjoying steak along with  good company, while at the same time deciding if I wanted to take the long way home, or just burn it up the freeway with the boys. Figuring that it might be a bit sketchy to ride home solo through “parts unknown” Kentucky, I decided it best to join a small crew of the Dayton RATs headed north in the morning. I debated with my buddy Steve about the possibility of taking the Cherohala into Tennessee and picking up I-75 that way, but by morning’s light I was glad we decided otherwise considering the much cooler temperatures. Stopping for gas in Robbinsville, I flipped on the heated grips for the first time since early spring; fall 2015 was certainly upon us.

At the Shell station in Robbinsville, it was obvious that the cycle of tourism never stops at Deal’s Gap; Triumph rider’s headed home from their rally as new groups began arriving. Pulling up to the pump I snapped a quick photo of a Ferrari gassing up, we past at least one more on a way into Tennessee. 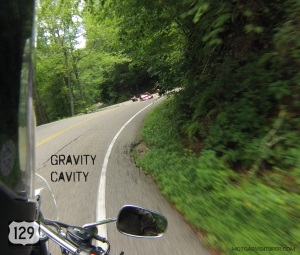 Despite not trekking back across the Cherohala, riding toward the freeway did offer one last run across the Dragon. From Robbinsville we took the lower portion is US-129, past “Fugitive Dam” (I’ll be back next year…), and past Deal’s Gap Motorcycle Resort headed towards Maryville, TN. Surprisingly, for 10 AM on a Sunday morning, there was significant traffic up and down the Dragon. Loaded down with (almost) all of my gear headed home, I was taking it easy, certainly there were quite a few sport bikes having at it, despite the early morning and low temperatures. 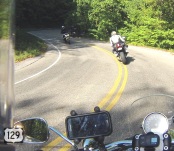 Considering that Sunday was my only “weekend ride” across the Dragon of 2015 (for good reason), this seems like a good time to remind folks that there will ALWAYS be someone faster on the Dragon. In general, I’m of the mindset give respect and get respect. Headed back across the Dragon, at a “cruiser pace”, I made an effort to watch my mirrors for approaching faster traffic.

If a pull-off was available, I made use of it; if not, when the path was clear, I moved over to the right and waved the sport bikes by. Inversely, it would behoove other motorcyclists to offer some respect, mind their own lane, and give folks a chance to get out of the way; cars ought to follow similar advice… just my two cents.

Once across the dragon, it was the grind up US-129 through Maryville, then the boring freeway ride to get across the Ohio River. Around 1,650 miles later, my “Big motorcycle vacation” was over; and I was already looking to book my stay for 2016.