It’s that time of the year again, Thanksgiving was just two weeks back and Christmas will be here before you know it. This is that time of year that the snowflakes start falling and I start planning for next year’s adventures. Actually that was a lie, let’s be honest, I’m always planning for the next adventure, but the Christmas to New Year’s Day stretch is generally when I lay out the vacation calendar for next year. Before I start planning for 2018, I first want to look back at how 2017’s goals turned out. 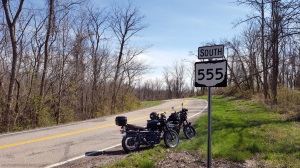 016 really didn’t pan out for big adventures considering the lull between swapping bikes and getting the Scrambler into fighting shape; on the flip-side, I came out swinging in 2017, knocking the Triple Nickel and Big Muskie off the Moto Bucket List in early spring. Two months later the stars aligned and I finally set out on my goal to ride 1,000 miles in less than 24 hours; almost three years in the making I finally finished a certified Saddle Sore 1000 in June. 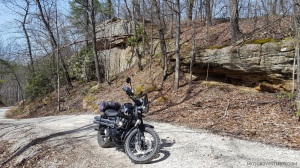 Somewhere in there I also spent multitude of weekends in the bluegrass state; social media posts of those exploits rapidly gave birth to the ad-hoc inaugural Red River Scramble adventure that I had originally planned to launch in spring of 2018. Combined with the fact that I found her in Louisville, Rosie the Scrambler has actually spent so much time in Kentucky this year I’ve taken to referring to her as the Bluegrass Belle. I’m hopeful that riding trend continues next year, and Rosie even gets a pin-up decal to match. 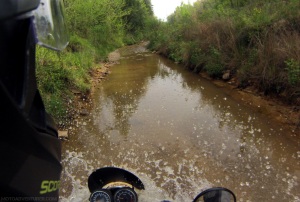 The Daniel Boone Backcountry Byway (DBBB) and the Kentucky Adventure Tour (KAT) both found their way onto the bucket list as replacements for the 555 and Big Muskie. Ironically, I found myself on a few sections of the DBBB just days after posting it on the bucket list; unfortunately, after no less than three attempts, I have yet to finish the entire 100 mile loop. Most of my off-road riding buddies have had some heavy doses of “life” this year and our schedules have just never managed to jive; 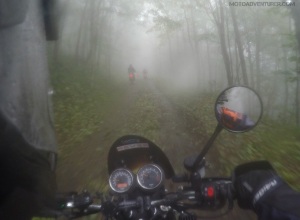 that combined with the fact this fall was arguably the wettest in years (so I hear). Considering that the northern sections overlap, I can claim that I have technically ridden a portion of the KAT, but I wouldn’t assert that I have made any honest attempt to tackle any sections not coincidentally on the DBBB. Later on in September, I did indeed decide take knobbies to the 2017 Triumph Dragon Raid, however I didn’t ride nearly as much dirt as I originally had planned. Hurricane Irma successfully put a pretty big damper on the rally this year; if I get off my bum, I’ll eventually lay out the details and post photos of that week at Deal’s Gap.

Laying the groundwork for 2018

As of this moment, I expect that Rosie will be wearing 50/50 dual sport tires year-round for the foreseeable future. 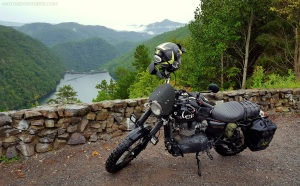 The Karoo 3/Shinko 804 combo proved so competent at the Dragon Raid I see no reason to swap them out for street tires unless I’m planning an excessively long, pavement-only, motorcycle adventure. To coincide with that, I would say that finishing the DBBB is arguably my biggest priority for 2018. I’m presently finalizing the last details, including new web pages, for Red River Scramble 2018, so I have high hopes of hitting this goal; bonus points for helping a few others check that box at the same time.

Related to the 2017 Dragon Raid, I wanted to ride into South Carolina and Georgia, but the weather simply didn’t cooperate. While I did pick up Virginia and Washington state this year, for 2018 I want to at least maintain that pace and visit no less than two new states. At this moment I have no idea what states those will be, but it would be easy to mark down Illinois by riding out to the Moonshine Lunch Run in April, or finally reaching Georgia and South Carolina at the 2018 Dragon Raid in September. 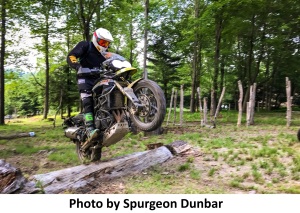 I also said that I wanted to hit an off-road rally in 2017. As predicted, life superseded “play time” and I’m forced to delay another year. That said, I have Conserve The Ride penciled on the calendar for 2018. The dates have not yet been announced, but the rally was scheduled for the last weekend in June last year, so I expect it should land in about the same place again this coming year. Per my previous comments, attending Conserve the Ride would mean riding through Pennsylvania, marking one more state off the list. 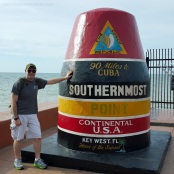 Over 1,300 miles from my doorstep, the southernmost point of the United States in Key West has been on the Moto Bucket List since day one. With exception of the bizarre traffic in Miami, I suspect that it will be a long boring ride from the northern Georgia border to US Highway 1; nonetheless, I’m really anxious for the experience, especially riding across the causeway. Which leads me to my next topic: 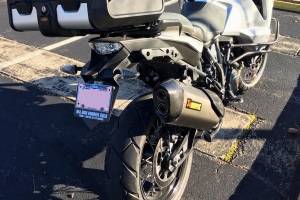 That challenge has another level of difficulty called the Bun Burner Silver, documenting a 1,500 mile ride in under 30 hours, and a final tier of difficulty called the Bun Burner Gold (BBG), for completing 1,500 miles in less than 24 hours. My buddy Rick that joined me for the Saddle Sore 1000 last June has already completed a BBG on his Tiger 800 so I have a good resource for tips and planning purposes. Completing the ride on the Scrambler (or similar bike) is going to be incredibly challenging considering the sheer number of fuel stops, however the current record for most fuel stops is 21, I’d like to think I can keep it under twenty and still finish in time. I’ve looked at several maps laying out plans for possible BBG routes and have contemplated combining the southernmost point and the BBG into one ride. If I head far enough east, I can grab gas outside of Pittsburgh and head south to Key West; top off my tank in the Conch Republic and have a beer waiting for me at Sloppy Joe’s, logging just a hair over 1,500 miles in one day. I’d like to think I won’t have to twist too many arms to get someone to meet me in Key West for a long weekend to be my documented “end witness” when I roll up after a ride like that.

Ride Every Day for 365 Consecutive Days

I mentioned wanting to ride year round way back in the early days of the blog. After already riding 10 miles or more for 160 consecutive days once this year, the challenge of riding daily Ohio for 365 days is no less daunting; but I admit, it feels slightly more within reach. 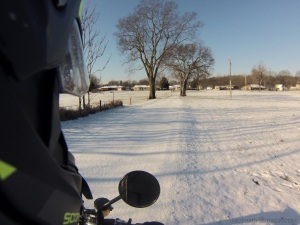 I’ve been back on the horse since fixing the Scrambler back in July, with the most challenging weather right in front of me. At this point, I see no reason to stop working toward a full calendar year; this winter I expect a few heavy snow storms, and I can about guarantee single digit temperatures, but I’m going to give it a go. Right now my biggest concern is keeping the Scrambler running through the harsh winter conditions; as a porch dweller, I’m fretting a bit about all the cold starts. While not inevitable, between work, the fact I only own one motorcycle, and the impending weather in the coming weeks, failure this year is pretty likely. Despite that, I’ve wanted to do this bad enough and long enough, it belongs on the Moto Bucket List, whether I make it this year or not.

18 Responses to Goals for 2018: Updating the Moto Bucket List