Ferris said “Life moves pretty fast. If you don’t stop and look around once in a while, you could miss it.”

Those words are ringing quite true at the moment. The new bike has been awesome, but between changing jobs and general “life” I’ve been neglecting the blog. Hopefully I can make it up to y’all with some photos and video of one of my favorite places.

Early this spring my cousin actually bought a Scrambler I’d been watching on Craigslist all winter. That actually worked out for me, as I got a chance to ride one and find out if it would be the bike for me (we know how that worked out). At any rate, from that moment he’d been asking me to join him on a moto-camping weekend at some savory motorcycle riding destination. Per my previous comments, schedules were not jiving for the longest time, but for Labor Day we did land a short weekend trip down to Red River Gorge.

Per my usual protocol, we picked up KY-36 into Frenchburg and on to KY-77 into the Gorge. 77 is one of my favorites, and a must-ride from KY-460 down through Nada Tunnel to KY-11. From 77 we set up camp at a campground in Slade and then set out to see some of the local destinations. Being Labor Day weekend, Natural Bridge was absolutely nuts, so we skipped across to KY-715 and on to Sky Bridge. If I hadn’t mentioned it before, Natural Bridge is also a “must-do” but I still feel that Sky Bridge is the better motorcycle destination, and it’ll save you $13 bucks since you won’t need to take the skylift to the views (you could hike, but over a mile up a mountain in armored gear, well sucks…). 715 was also a zoo as it’s the main thoroughfare through the gorge, but ample twisties and cool mountain air under the canopy made it worthwhile. 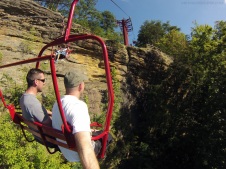 The next morning my cousin and I set out to ride some new roads a bit south of the gorge (hoping to avoid the traffic).

Headed west out of Slade we took a less-traveled southerly route toward KY-52 by picking up KY-1639. 1639 winds through foot hills like many other state routes near the gorge; another “barely” two-lane road sweeps by farms through the valley as you link up with KY-1057 headed up the mountain. KY-1057 was more of the same with more elevation changes and then more scenic views as you merge onto KY-213.

From KY-213 we picked up KY-52 headed east into Beattyville. KY-52 is very well maintained, and nearly free of gravel washouts and debris that plagues a lot of the blind curves on many of the backroads. 52 allows for a more spirited pace, yet be mindful of the steep downhill grade as you approach Beattyville, especially considering that a decreasing radius turn may be around the very next bend.

After a short break in Beattyville, we continued down KY-52 for a short jaunt in search of KY-2016. I had actually ridden KY-52 last October, so 2016 turned out to be a real surprise. 2016 is a 13 mile stretch from St. Helens to Rogers, Kentucky. 2016 is reminiscent of KY-77 in many ways; sweeping, unmarked, curves along local farms, and loaded with blind turns. That said, KY-2016 appears to be less populated with travelers and is almost narrow enough to considered one-and-a-half lane. While I didn’t have to stop for a Deer like KY-213, there was a flock of wild turkeys scurrying across the road. 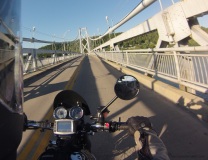