After wearing out the Shinko 705 rear tire last fall, I decided to upgrade to the Heidenau K60 Scout. 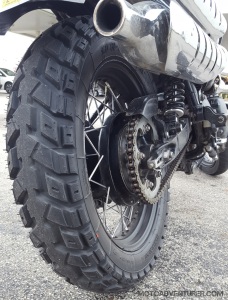 My initial plan was to outfit the bike to ride gravel and dirt throughout the winter & spring, but as luck would have it, the winter was exceptionally warm, yet not warm enough to venture far enough south to do a whole lot of dual sport riding. I decided to upgrade to the 140 width rear tire so I could get the center strip for additional wear life (the stock 130 width only has the chevron tread pattern, no center strip). Along with the fact that the K60 Scout is a bit square compared to the other tires I’ve run up to this point, the wider rear tire does cause to the turn-in to be a bit sluggish, especially as it starts to square off with wear. I didn’t get a chance to truly test the tire in the mud, however I will say that the K60 was exceptional on dirt and gravel for what little bit I managed to do. I will also say that compared to the reviews I read, that actual wet and cold weather grip was far superior to what others have suggested. 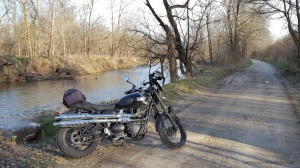 At around 5,500 miles I will say the tire does have respectable longevity (for a Scrambler tire), but it is a bit pricey at $175 and still isn’t getting the boasted mileage I’ve read online ( I suspect that the 150 width tire gets significantly more miles as it too has a different tread pattern). I am going to replace the tire a bit “early” as it has finally squared off to the point that the ride just isn’t “fun” anymore; that’s actually never happened to me prior to this tire. That said, I can see myself buying another K60 rear in the distant future, especially if I was going on some longer, truly 50/50, dual sport rides.

In my world, hand guards are a “must”, and were very high on the to-do list after bringing Rosie home. I went back and forth with several retailers about getting a set of “Bark Busters” mounted on the Scrambler, but apparently the factory “threaded” bars were a problem with most aftermarket hand guards.

Unwilling to pay the extra $60-100 for a new set of bars, I dropped by Joe’s Cycle Shop to examine the Tiger hand guards. Several of the members of the Scrambler ADVrider thread have mounted the Tiger 1050 hand guards in the past, so I suspected that the 800 hand guards might also fit. After closer inspection, I decided to pull the trigger and modify as necessary to make them work. The problem with either set of hand guards is that the factory Scrambler bars are threaded for an M5x25mm bolt, whereas the Tiger (among other bikes) is threaded for an M6x40 bolt. 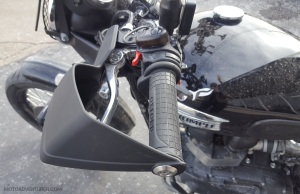 I installed the Tiger 800 Hand guards with no issue, but initially left off the Tiger bar end weights (included with the guards) and used some cheap spacers from the hardware store to fill the gap while still using the standard M5 bolt. That all went swimmingly until the bolt backed out while riding off-road. Since I had to replace the bolt anyway, I splurged and ordered a package of M5x40mm bolts off the web for $7. That allowed me to install the factory end weights for more “hand-room” and even better looks. In the end the Tiger hand guards are a bit more expensive ($135) than other aftermarket brands, but from what I’ve heard they provide better “air protection”. Admittedly, they will not provide the same level of “crash” protection as the aluminum-backed aftermarket varieties, but I’m not as concerned about that at the moment.

As much as I liked the look and convenience of the Triumph solo seat (with luggage rack), it was unfortunately not up to the task of all day riding.

Don’t get me wrong, it proved to be firmer, and therefore superior to the stock “ironing board”, but after about two hours, I was pretty much done with the solo seat (the stock seat lasted about an hour). Now, I did tolerate the seat for long days down to Kentucky and the Dragon Raid, but if I plan on completing the Saddle Sore 1000 this year, I knew I was going to need a new seat. I debated having the solo seat re-upholstered, or sent out to Russell Day-Long to be completely re-engineered, but considering the cost, hassle, and fear of the “unknown”, I decided to stick with something commercially available.

After studying the different reviews online I decided that the Bonneville Sport-Touring seat from Mustang Seats was probably the best choice. Not long after having mounted the new seat I took a solo trip down through Red River Gorge and back. I can unquestionably say it has made a world of difference. I admit, there are days that I will still experience an odd “hot spot” on my left side, but I suspect it has something to do with how I’m sitting in the seat. If I stay in the “dished” portion of the saddle from the beginning of the ride, I seldom notice that issue. All-in-all, it’s been a solid investment for about $360.

Originally I had envisioned a motocross style “high” fender on my Scrambler project.

After my Red River Gorge adventure last November, it became evident that the oil cooler gets completely loaded with mud with just a bit of puddle splashing and trail riding. As a result, I did some various research online and it appeared that a fender extension would probably be the best solution for the problem. Obviously the standard fender configuration can lend itself to be overloaded with mud, however

I suspect it may be a while before Rosie the Scrambler finds herself in those situations, so I’ll cross that bridge when I come to it. At any rate, for less than $40 delivered from the UK, a formed piece of plastic with a little epoxy and now I can happily say that the oil cooler stays mud free.

The stock Trail Wing was nothing to write home about, but the Anakee 3 proved to be an excellent all-weather road tire.

Unfortunately, the Anakee loaded up with mud within seconds during my trip down Spaas Creek last November. Vowing to get across that road at least once, it was time to step up Rosie’s game, so I made the jump to some serious “Adventure” knobbies. Again, after browsing reviews, it appeared that the Shinko 804 “Adventure Trail” was equally capable compared to the “legendary” Continental TKC80 Twinduro. Considering how much I liked the Shinko 705, I figured a more aggressive Shinko was the way to go; the fact that the 804 is a shade cheaper than the TKCs didn’t hurt either. Thus far the front end “feel” in the gravel and dirt has been excellent in the few jaunts I’ve done off-road since February. 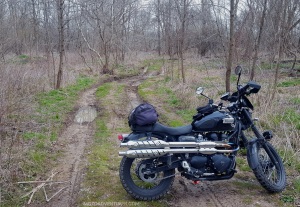 The on-road feel has been really good, along with respectable wet grip for being a true knobby tire. I admit that I now ride just a shade more “gingerly” as the knobby stopping power up front isn’t quite as firm as a street tire, especially in the rain. That said, the cornering ability on the 804 on dry pavement is quite surefooted, I would expect that you can ride almost flat out through the curves, just be cautious about grabbing a handful of front brake. I expect the true test of mud will happen in the coming months.

Whilst riding down Spaas Creek Road, I decided that it would be best to circumvent a particularly treacherous looking mud hole. 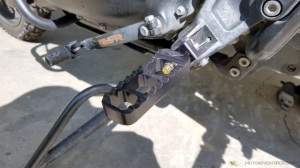 Everything was going swimmingly until my muddy boot slipped off the stock rubber peg; after which I was “scrambling” for real trying to keep Rosie right side up on the muddy embankment. At that point it was evident that I needed a good set of serrated pegs if I was going to keep up the dual sport riding. From what I can tell, the peg selection for the Scrambler is a bit limited. I was eyeing a very versatile set from SW-Motech, however it turns out that local vendors are currently on back-order and the company refuses to sell them to me direct from Germany; fortunately, Joker Machine came to the rescue. With about a thousand miles under their belt, I can definitely say they not only provide solid grip on the bottom of my adventure boots, they also make a small “platform” which is even more comfortable while standing. I admit that the serrations are a bit shorter than I’d like, meaning they can still be a bit slick if you’ve not planted your boot properly. Either way, they’re a huge improvement from where I started.