I mentioned a few weeks ago that I had done some initial reconnaissance at a new street eats location. Lately I’ve been ripping up the Little Miami River corridor at every opportunity, so stopping at Chubby’s for snack has been an easy decision. For those of you unfamiliar, the Little Miami River runs from Springfield down to the Ohio River. As the Little Miami enters northern Xenia, several roads begin to run along the river’s edge, making for good riding. Whenever possible I usually put a ride together starting somewhere in Beavercreek (Eastern Dayton) in order to pick up as many of the twisty river roads as possible.

Unquestionably,  the two hair-pin turns on OH-350 through Ft. Ancient Archaeological Park are my favorite twisties in town. There are certainly better roads in Ohio, but none are closer to Dayton. OH-350 and Wilmington Road both cross a very steep river valley incline, so much so that both roads are posted with “Warning: Impassible for campers, Semi Trucks, Heavy Trucks Ahead”; that’s pretty much irresistible gravitational pull for this particular motorcyclist. If planned right, you can hit all four curves, then skip over to Middleboro Road for a few more bends and grab a snack.

At any rate, the last time I was wandering around Blanchester I noticed a new drive-up diner had re-opened. Unbeknownst to me, it was actually a new location for Chubby’s Pizza, which I had previous tried in Morrow (this is now the newest of three locations). Having had the pizza before, I knew I had landed a new ride destination. I have been unable to establish the true history of the building, but from what I can tell, it used to be a Mom & Pop Dairy Queen type location, called “The Dairy Point”, hence the new Chubby’s title, but don’t quote me on that. Since “Diners, Drive-ins, and Dives” is right in my wheelhouse, I will never turn down another visit to the new Chubby’s location.

Be warned, the Chubby’s menu is extensive; just about any American fare you’re looking for is available: pizza, hoagies (hot or cold), wraps, salad, fried vegetables, hot wings, pasta, calzones; you name it! On my first visit, having already sampled their pizza elsewhere (I am a connoisseur after all…), I decided that it’s only fair try my next favorite food group, submarine sandwiches (or “Hoagies” as some call them…). While it’s a favorite of mine from Penn Station, Chubby’s also has a “Dagwood” on their menu; I couldn’t resist. The Dagwood Hoagie at Chubby’s is served with salami, pepper loaf, pepperoni with Pizza Sauce, Onion, pickle, and mozzarella cheese, all paired with a side of chips. Salami and pepperoni are undoubtedly what draws me to pretty much any sub; while Chubby’s didn’t disappoint, 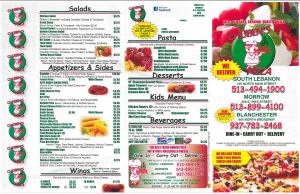 I admit the my favorite Italian lunch meat was somewhat overpowered by the pizza sauce. It was still a good sandwich, but I’ll have to keep that in mind for the next go round; pizza sauce apparently isn’t my thing. While the Dagwood and chips are probably sufficient for most adults for one sitting, I as usual, put my stomach on the line for my dedicated followers, and also ordered the Buffalo Fries. After Bacon, then Pepperoni, buffalo sauce is probably the next best way to get me to buy a given entree; the buffalo fries were no exception. The Menu simply states “Bacon, Mozzarella, & Buffalo Sauce”; yup, that pretty much covers the all the necessary ingredients for road food nirvana right there! Classic diner fries, topped in delicious mozzarella cheese, spackled in buffalo sauce, topped with copious amounts of bacon, placed into the oven until perfection; hands down the best loaded fries I’ve had anywhere! 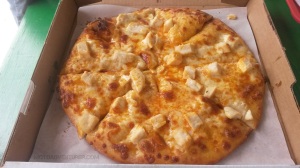 As the Weather has slowly begun to dry out, I’ve made repeated trips down to Blanchester doing route recon for several rides I plan on leading for friends this summer. On my second visit, on one such previously mentioned ride, a buddy of mine and I split the buffalo chicken pizza (detecting a trend here?). Chubby’s Buffalo pizza is pretty simple, served with mild buffalo sauce, grilled chicken, and mozzarella cheese; simplicity is the beauty. I wish I could adequately describe the crust, especially as I find that’s often the deal breaker for most folks with regard to Pizza. I’m a pan pizza crust kind of guy (Chicago deep dish is my absolute favorite), whereas many people in Dayton prefer thin crust. In any case, I would actually say that Chubby’s pizza seems to be “hand tossed” (so says the menu as it turns out…), halfway between pan and thin crust, which is actually a nice medium; soft enough for pan pizza lovers like myself, but still slightly crispy for folks that prefer the thinner crust. As I said before, the pizza here is a real winner, I don’t know if it would be fair to put it toe-to-toe with Ron’s or Marion’s locally, but it’s certainly a fair contender.

Did I mention there’s ice cream? If planned correctly, a good ride can include breakfast, lunch, and desert, which certainly makes Chubby’s in Blanchester another good motorcycle destination. Middleboro road is no slouch when it comes to twisties, so a nice cold chocolate cherry shake is a nice reward between sections of the ride on a hot afternoon. The desert menu is also pretty lengthy, desert is mostly my wife’s department, but I went ahead and sampled a couple sundaes on my last couple visits, including the double chocolate ice cream, chocolate syrup this week.

While the sundaes are obviously good, I admit I’m still partial to the chocolate cherry shake; someone said to me “eew… chocolate cherry?!?”, umm… yes, chocolate soft serve, with real maraschino cherries mixed in, it’s killer! Speaking of that double chocolate sundae I had Tuesday,

as it turns out, Tuesday nights are also classic car cruise-ins at Chubby’s, which was pretty cool icing on the cake. I snapped a few photos before darting back up the Little Miami corridor before dark (lots of deer about in farm country after all). 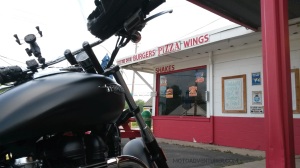 I’m glad to see another privately owned diner is still making due in this “big box store” world we live in now. These destinations are some of my favorite when venturing about, and Chubby’s is right on one of my favorite “go-to” twisty routes, which makes the trip even better. 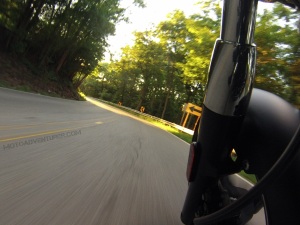 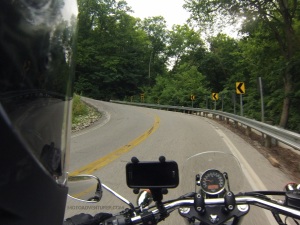 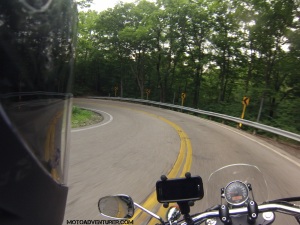 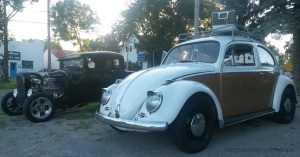